Book Review: Made in Pakistan 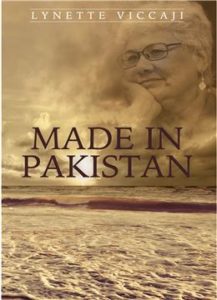 Lynette Viccaji’s Made in Pakistan is a book that simultaneously celebrates the magnanimity and simplicity of an older Karachi as well as welcomes the inevitable progression that is constantly changing the city’s landscape. The book is structured around Viccaji’s life and presents a series of events and stories from her childhood and adulthood in a light-hearted and humorous way. Her struggles and triumphs mirror those of many Pakistanis, but her insightful descriptions and witty one-liners, along with the structure of the book, give her story a distinctive flavour.

Viccaji’s naturally flowing narrative style and the anecdotal nature of the book makes it a fresh and light read. However, the anecdotes are sewn together with some incisive commentary about complex issues, such as identity crisis and the rapid urbanization of Karachi. The book itself starts with recounting how a radio commentator mindlessly referred to the Pakistani cricket team as the “Islami Army” and thus immediately acknowledges the narrator’s position and perspective as an Anglo-Indian Pakistani Christian.

While Viccaji insists that Pakistanis are a group of largely diverse people, her commentary also reveals their incessant need to appear as a uniform and monolithic body of people. She relates the story of a train ride, where the fellow passengers blatantly (and probably innocently) disparaged the food she was having for not being Pakistani enough. These stories are told with humour but also force one to question why Pakistanis are so afraid of embracing their cosmopolitan tendencies?

Viccaji also devotes time to some inescapable realities of Karachi. One such section, and perhaps my favorite section of the book, is the dissection of “Mailas” or girl-teasers that stroll the streets of the city. The categorical breakdown of the different kinds of Mailas is extremely accurate and her tongue-in-cheek way of presenting them is likely to get an amen from all the female readers who have dared to walk on the streets of Karachi.

From the title itself, Viccaji’s wit manifests itself throughout the narrative. Whether she is describing the unfortunate incident of her house being infested by bedbugs or her ritualistic afternoon naps, Viccaji’s one-liners are sure to get a few laughs. The most interesting word bites are strategically placed at the end of each chapter, which serve as an effective transition to the next.

The thought-provoking line“‘Identity’ is too narrow a word” is the first and the last statement of the book. The lines not only complete the book structurally but also capture the essence of this memoir. For the older generation, the book contains many nostalgic elements and for the younger one, it is a beautiful gateway to a Karachi they were never able to experience.