This is the first of a three-part series of the author’s travels in Pakistan. 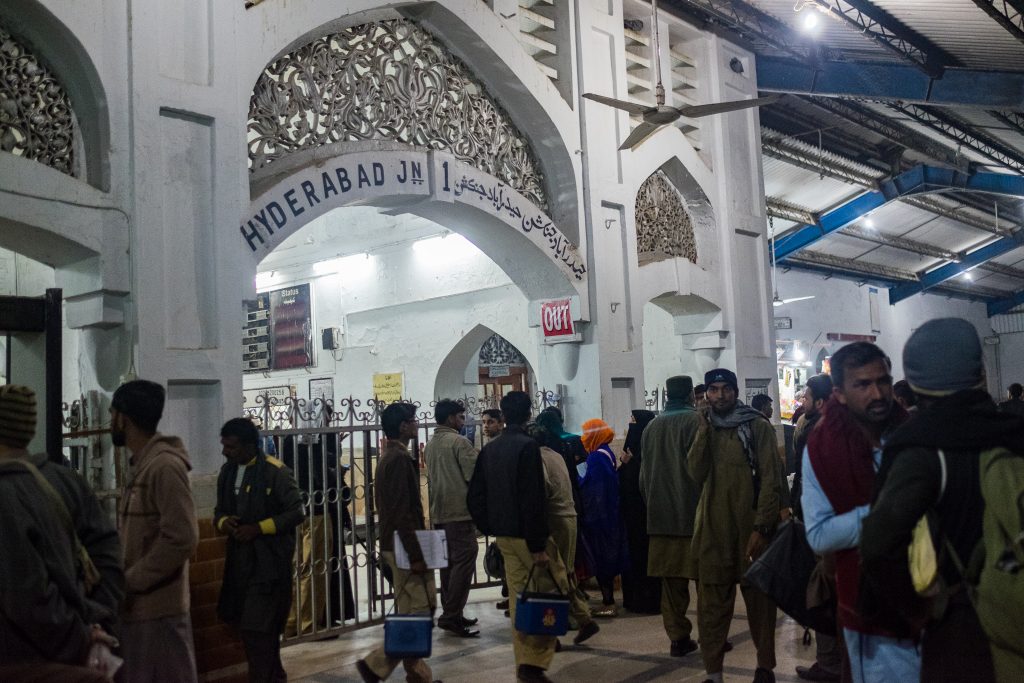 I recently decided to take a trip from Karachi with no specific destination in mind. The plan was to travel without a plan and decide on the spur of the moment on where to go thus no train or bus schedules were consulted or any bookings made. In keeping with the desire for a different of experience, hotel accommodation was to be of the cheap variety.

While a deeper analysis of my motivation for such a trip at the age of sixty plus may belong to a book on the psychology of aging, my own reason was that I was tired of the structured approach that I had travelled with till now. All my trips for business or pleasure had been planned with detailed itineraries along-with airline or hotel bookings made well in advance. When travelling for pleasure I carried popular travel guides like the Lonely Planet series.

This time I wanted to see what it would be like to travel in Pakistan like a common Pakistani. I wanted no prior information on anything other than the general direction in which the highways led from Karachi.

Well meaning family and friends tried to convince me to abandon such a foolhardy idea as they thought that someone like me who had lived most of his adult life in the West would not survive the rigors of roughing it in Pakistan.  But I persisted, and when they found me adamant, they turned to betting among themselves on how long I would survive and how far I would get!

On the morning of January 11th I asked my driver to drop me off at the Karachi Cantt. Station. I was carrying a small tote bag that contained two changes of clothing, toiletries, a paper notebook, a pen and a novel. The largest and the only valuable item in the bag was my camera. In the spirit of shunning modern technology my cell phone was of the cheapest variety that had no provision for internet access. I was dressed in an ordinary shalwar kameez.

I went to the platform and asked the stationmaster when the first train was leaving in the direction of Hyderabad. He pointed to a train at the next platform and said it was about to leave so I better run. “But I don’t have a ticket!” I said to him. “No problem, you can buy it inside the train for an additional 70 rupees.”

I climbed the bridge connecting the two platforms at a trot. The train had just started to move so I ran and jumped into the first open door I found. It seemed  better than the lowest class train as the seats were padded. The train was not crowded and the passengers were seated three to a bench. I found an empty seat and settled there. A few minutes later the rightful owner who had booked that seat turned up and I had to vacate the seat. The man seemed very apologetic to have displaced an older man and suggested that I could climb up on the upper berth and sit there. No trusting my aging legs to be stable while climbing on a ladder in a moving train I preferred to remain standing. After about five minutes the man with the booked seat seemed to be bothered by his conscience and asked me to take his place and himself climbed up to the upper berth. I thanked him profusely and said I will mention his kindness in the essay I am planning to write about the trip. “In that case, make sure you mention my name, it is Zahoor Ahmed!” He told me with a smile.

I asked a fellow passenger what train it was and was told that this was the Allama Iqbal Express. The train was supposed to leave Karachi at 2:00 pm but had been delayed by 2 hours.   It seemed that I had timed my arrival at the platform perfectly!

The train soon turned into a bazar on wheels. There was the man calling out, “Tea bag Chai Walla!”, and would make a fresh cup of tea with a tea bag in a cup with hot water poured from a thermos in the fast moving train with remarkable dexterity. Tea lovers were not short of choices as another man was offering “Hot Ready Chai” for the same price as the more refined Tea Bag Chai.

A biryani seller, a fruit seller, and a snacks seller followed the tea vendors. Then came men selling bed sheets, Hyderabadi chappals, handbags and jewelry. I bought a nice ladies purse for 180 rupees at which I was sternly reprimanded by a fellow passenger who said that I could have paid much less for it in Hyderabad. This procession was interspersed with many beggars.

A kindly ticket checker with hennaed beard, whose badge said he was Ghulam Mustafa, came and I bought my ticket from him for 350 rupees that included the additional 70 for buying it in the train. He gave me his blessings for a safe journey. A man asked Mr. Mustafa for the arrival time in Hyderabad. Much to the amusement of all he replied  “I don’t know,” and then pointed to the biryani seller and said, “Ask him.”  The biryani seller  laconically informed us that it would be 3:00 am. 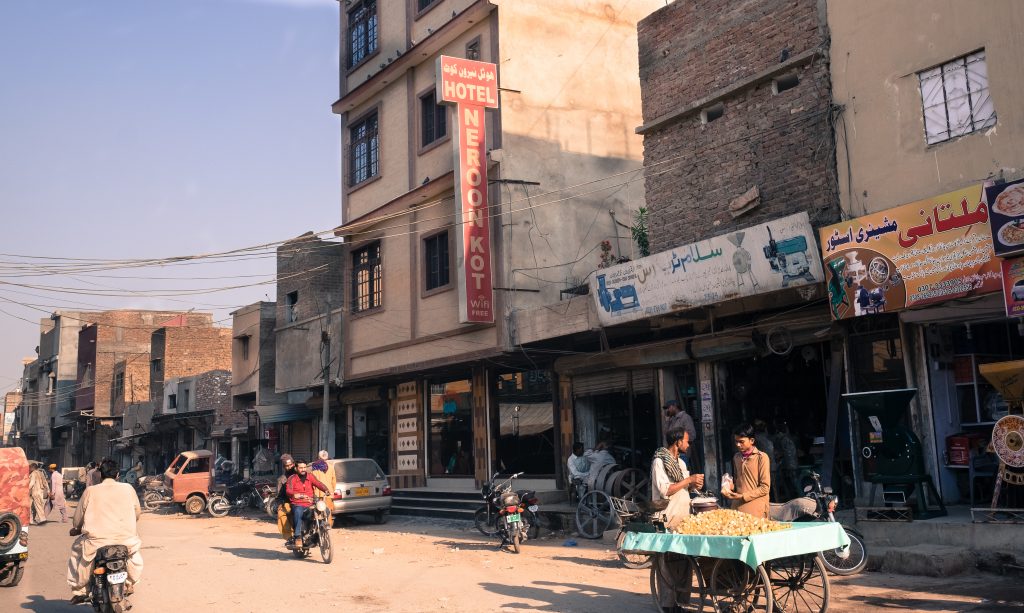 The hotel where I stayed

The train pulled into the Hyderabad Station and I stepped out with some difficulty, as the passengers boarding from Hyderabad seemed in quite a rush to get in. The area around the railway station was crowded and chaotic; typical of such locales. There was an immediate attack on the senses as the air was thick with dust and fumes. I walked into the first reasonable looking hotel. It was named “Neroon Kot”, which was the name of the ancient village where the city of Hyderabad was built in the 11th century. The room was very small and basic but seemed reasonably clean. Of course the toilet was of the squatting type and the modern flush system was purely decorative. The real system consisted of a plastic bucket filled with water. The bed sheets had seen some heavy previous use but I was pleased to see that a clean towel and a fresh cake of soap were provided. No bad for Rs. 700 per night.   The hotel staff consisted of a receptionist and an assistant receptionist. 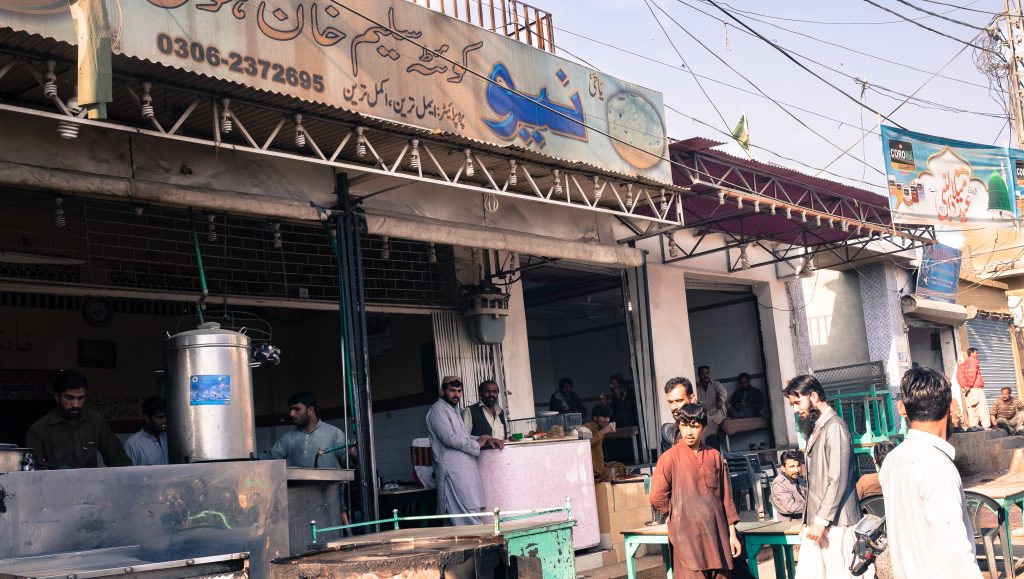 This place serves up a great plate of channa and paratha

Feeling hungry I went out and peeped into the myriad restaurants scattered around the area. I decided on Quetta Saleem Khan Hotel that was serving parathas and channa. The food was excellent and newspapers served as napkins. Had a hot cup of green tea to clear my throat of the oil in the parathas.   I picked up some dry fruit from a Khan Sahib who told me that his shop is open 24 hours. “This is the station area. It never sleeps!” he told me. He and his cousin did 12 hours shift to man the shop. “Winter is the time for selling dry fruits. If I don’t get a good sale now I will not be able to pay the rent to the shop owner,” he informed me. 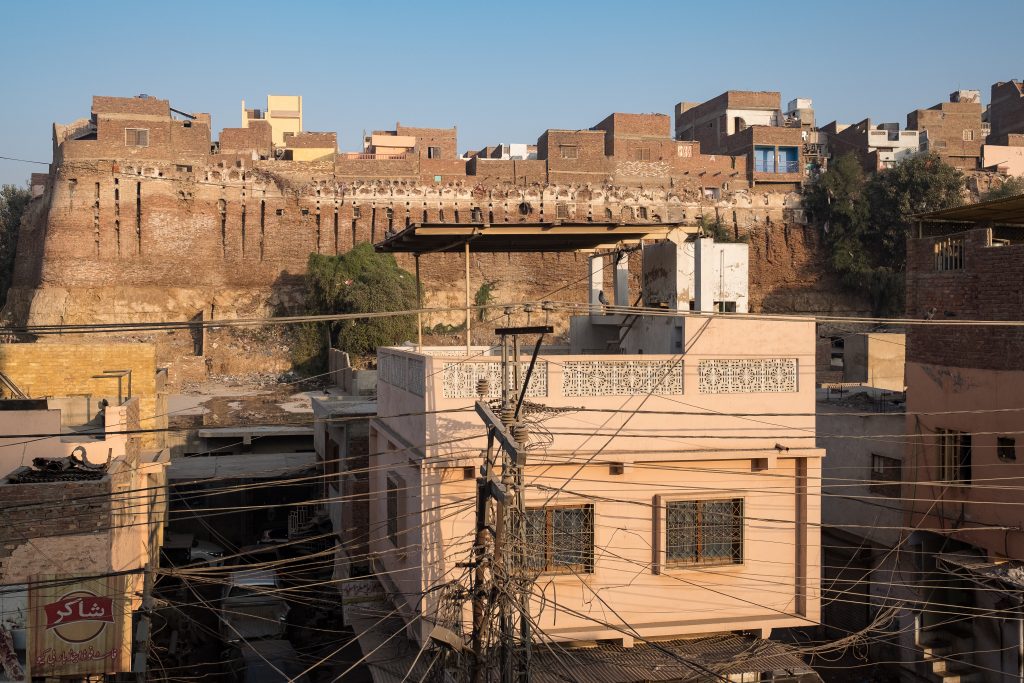 Pucca Qila can be seen in the background

Some of the old buildings in the city 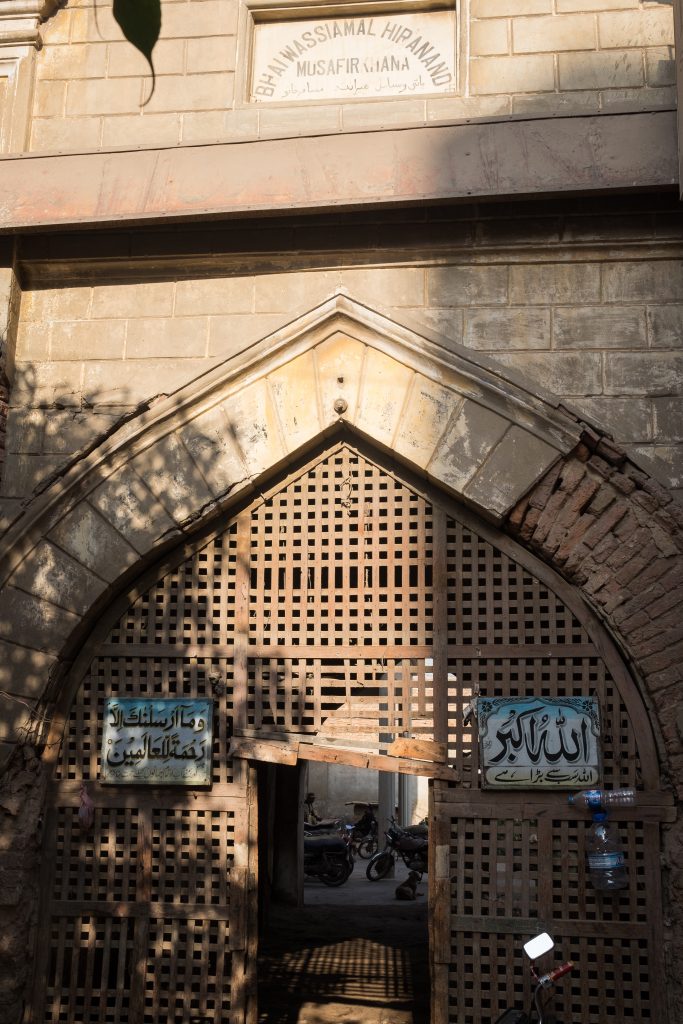 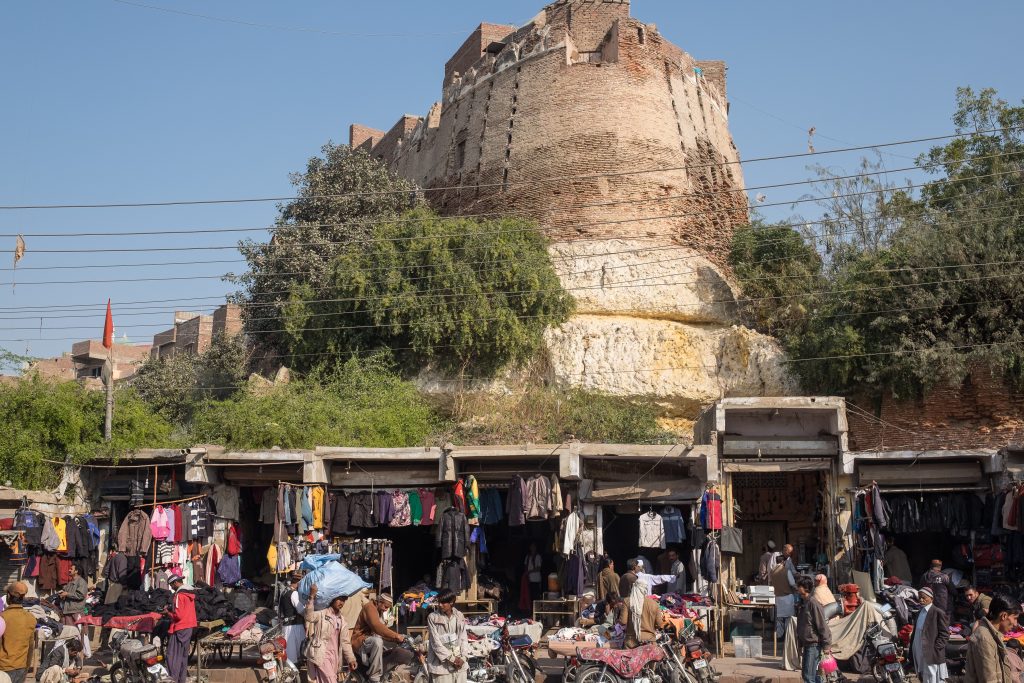 Another view of the Pucca Qilla

Next morning I took a walking tour of the city. The center of the city is built on two small hills and a fortress wall partially surrounds the inner core. The fortress made of bricks called Pukka Qilla was built in the 19th century. Had the structure of the imposing fortress been well preserved, the whole area would have looked very charming. All the old structures were in a poor shape and it seemed that this historic part of the city was a victim of callous neglect. The narrow roads were pot-holed and drains were overflowing. There was no traffic management and there was a complete chaos created by pedestrians, donkey and camel driven carts, buses, trucks, rickshaws, motorcycles, and bicycles. 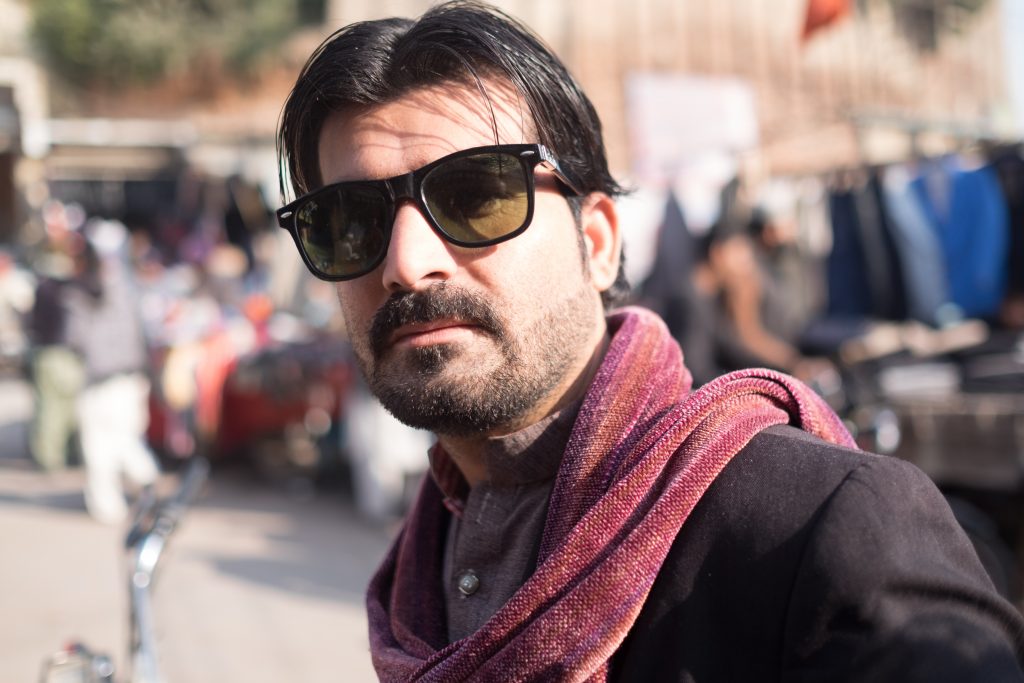 It seemed Hyderabad does not see many people walking around with a camera and I got a good deal of attention. Some cheerful young men who were having tea in a restaurant in the Union Council Square included a Video Jockey Arshad Durrani who looked very much the part. One of his friends told me that the small cyst in my eye was the result of gas in the stomach and prescribed a blend of some complex sounding herbs. He also told me of some exotic Iranian medicine that would, in two days, rid me of my prescription glasses! “When that happens, just remember me in your payers,” he made me promise! Of course, they insisted that I have a cup of tea with them. 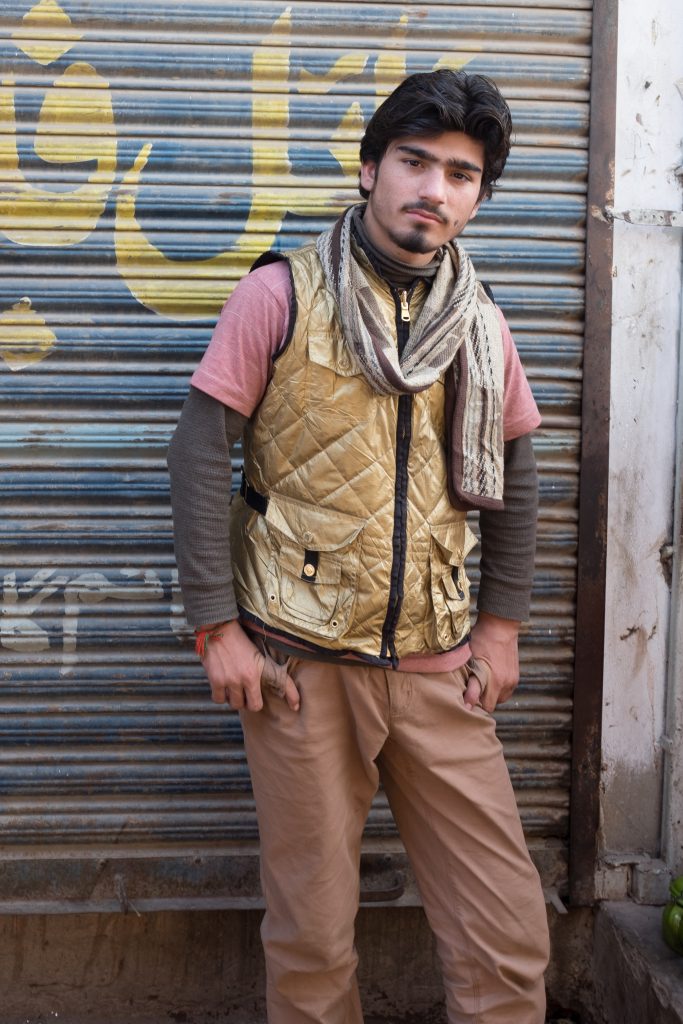 No dearth of style in Hyderabad

I walked along the road to another famous milestone of Hyderabad, the shrine of Hazrat Mohammad Shah Makki who was supposedly a companion of the holy prophet. The shrine is located inside another fort called “Kacha Qilla” (since it is built of mud rather than bricks). 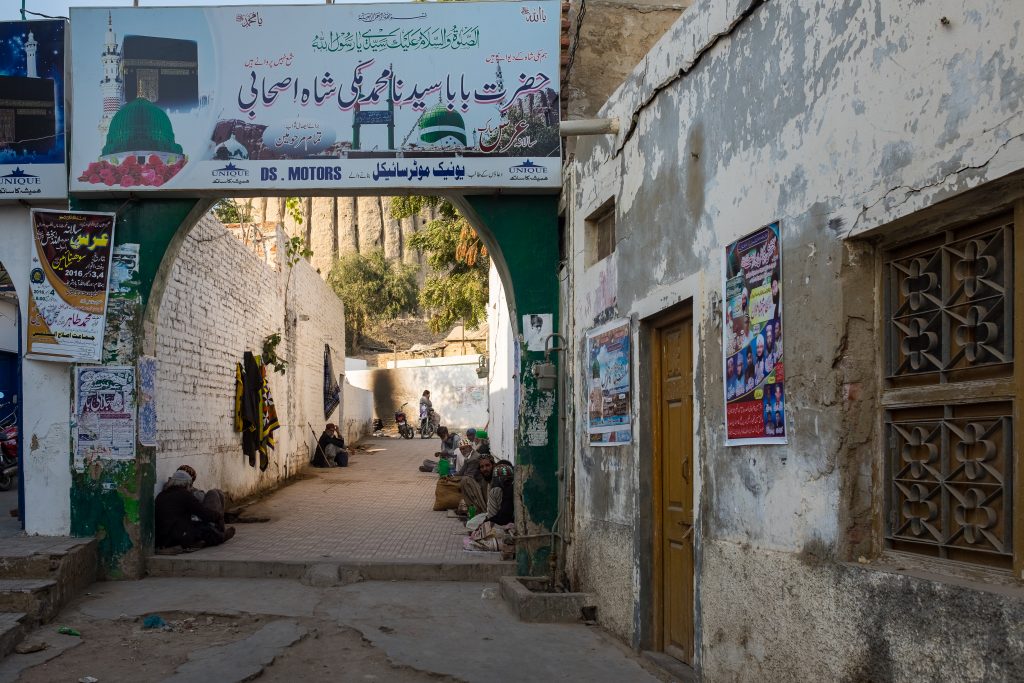 Entrance to the shrine of Makki Shah the Lion Rider

The walls of the Kucha Villa visible next to the shrine

The shrine provided much-needed relief from the noise and confusion of the streets. It was cool and peaceful. I sat there for a long time watching a steady stream of devotees file into the shrine. Photography was not permitted in the inner part of the shrine and a notice warned, “Anyone taking videos will be punished by the orders of the Saint Hazrat Mohammad Shah Makki.” Sounds of a woman screaming, crying and pleading to the saint to rid her daughter of the djinns provided a rather eerie backdrop to a peaceful setting. 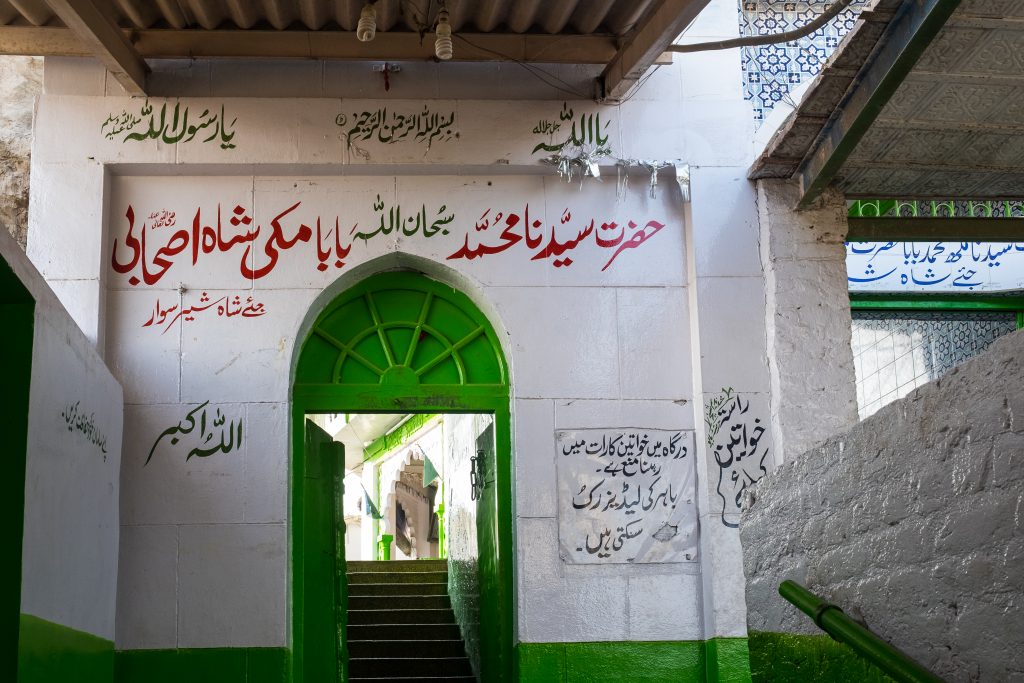 Stairs leading to the inner courtyard

I marched on to another well-known shrine a little distance away. This area is called “Maula Ali Qadam” or the Footsteps of Ali and was the shrine of Hazrat Abdul Wahab Shah Jilani (1831-1921), a descendent of the famous sufi saint Shah Abdul Qadir Jillani. He migrated from Baghdad to Kathri Sharif near Hyderabad. A man was sitting in the centre of the courtyard and rendering a naat in a very soulful voice. The whole atmosphere exuded a sense of calm. 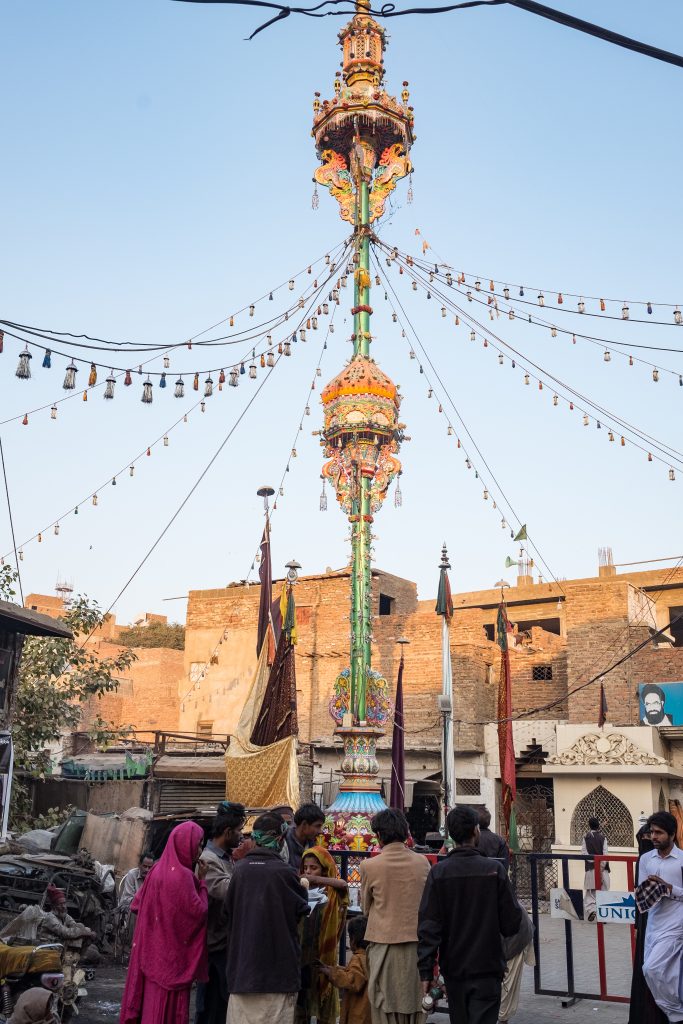 Entrance to the shrine of Hazrat Abdul Shah Wahab Jilani

Close to the shrine was Shahi Bazar that is claimed by the locals as the longest jewelers’ street in Asia. My tired feet can vouch for the length of the street. Tired, I took a rickshaw back to the hotel. It was the first of many rickshaw rides that were to reduce my back to a state of near collapse. The redeeming factor though was that the fare which was half of what I would have paid in Karachi.

Dinner consisted of Daal Maash and a roti at a roadside restaurant, as I was afraid that eating anything else would kill my pampered digestive system. And I didn’t want that to be my last memory of Hyderabad.

The journey continues in the next article which will follow shortly.