My first glimpse into Uldus Bakhtiozina’s work was at her TED talk. What struck me most about her was how easily her stories cross over into the context of Pakistan. The social pressures, limiting beliefs and slew of judgments her subjects face are those that routinely make our blood boil. A bouncer with a sensitive core who is under pressure to act more aggressive than he actually ever feels. A teenage boy who dreams of ballet instead of Superman but is afraid to tell his peers. A woman who refuses to take part in the squabble for a good husband. Beneath their very foreign skins and settings, their battles were uncannily familiar.

He looks away from the camera, head tilted at an angle; pensive, as if beset with a burden. They are Barbies when you look closer. Upside down Barbies, held together by their feet at the top of the Victorian collar, their bodies fanning out as ruffles. In a widening arc at the base, the tuft of their light blonde hair form small, still clouds dotting the lower rim. The wearer is well-built; he would subscribe to your idea of ‘macho.’ This is Nikita, a young Russian from St Petersburg. His pro- fession? Bouncer at a local bar. His secret? He’s a pacifist. Even when there is a brawl at the night club where he works, he uses words instead of punches. Where’s the problem with that, you might wonder. It’s the false ideal of masculinity and strength. A man is not a man unless he shouts or packs a punch. So, while you might hear him growl half-ferociously, “You won’t like me in anger Ã  la Hulk,” chances are, if you’re a friend, you’d be hard-pressed to actually see him angry. 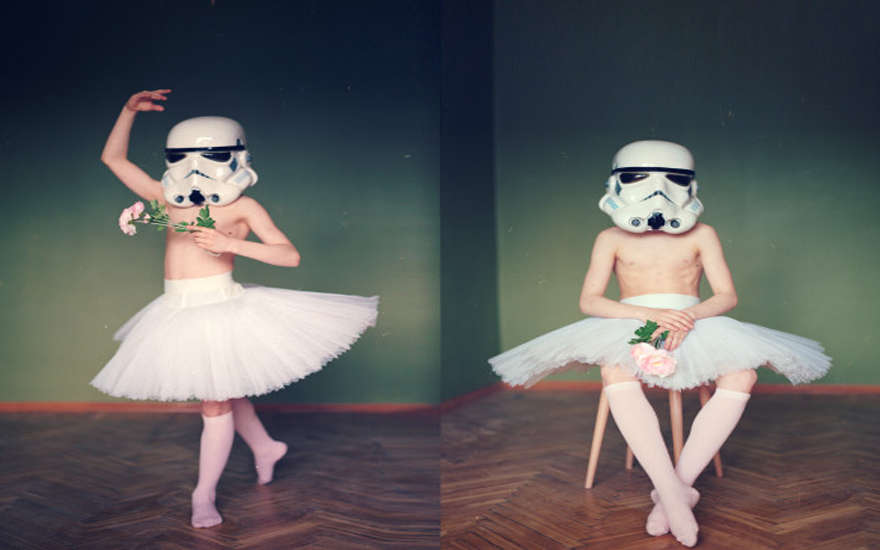 ‘Aren’t you a little too young to be a storm-trooper?’

Next, a storm-trooper mid-ballet.It starts out fine with a white storm-trooper mask, that universal identity totem of teens. He even wields some- thing like a gun, it seems. Only, it’s a flower. Things get stranger from there on. A bird-like child’s torso, a tutu’s bell and white stockings. Rustam is a Tartar teenager. The youngest of the models in the 30-strong and ongoing series, he just turned 14 this year. His profession? Student. His secret? He wants to be a dancer. During school hours, he plays it safe and dons a mask of anonymity. Come home time, however, he dashes off to dance practice, with dreams of a dance career in his heart. The irony of the works is of the laugh-out-loud sort at times. Like when Iron Man becomes Ironing Man. The model is another Nikita, this time a graphic designer who moved to St Petersburg from a small village. His looks, effeminate by societal standards, cast a doubt about his sexual orientation. He lives with the stigma that he isn’t straight. Then there’s the dreamy- eyed chef who kneels in prayer to cupcakes in front of a cooking range, swooning over them as if they were forbidden manna. The cupcakes are dark and have Satanic symbols iced in white onto them. He bites into them intoxicated. He’s also noticeably and unusually well built for a chef. The mystery? He has two professions which are almost mutually exclusive, and he is equally passionate about them. Fitness instructor and pastry chef. 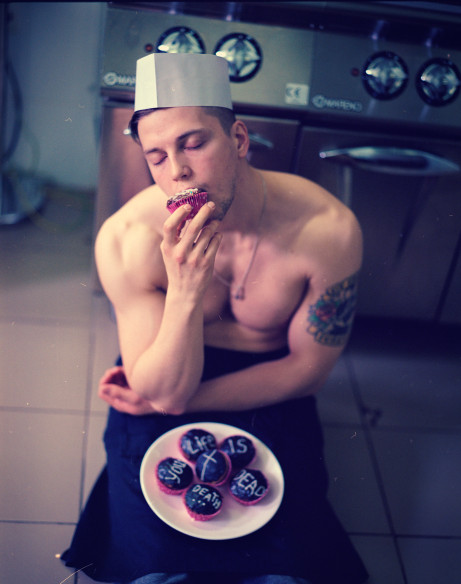 ‘Roses are red, violets are blue, religion is cheaper than dinner for two’

These youngsters are part of a community of young Romantics who live secret inner lives at odds with societal standards. They’re in Russia, but they could be anywhere, really, with different faces and different names, and fires of different dreams burning inside them. As they open up to Bakhtiozina, the result is a series of dramatised moments of truth: the subjects unmasked and vulnerable, alone with their deepest burdens and desires. Bakhtiozina is no stranger to their battles. “I’m one of them,” she tells me, speaking from St Petersburg, shortly after her return from Mexico. “Every day, when I walk my dog or go to buy something at the supermarket, I feel the sword of judgment dangling on my head. It starts with superficial things, like the way I dress or how I choose to colour my hair, and goes down to really personal matters, like why I’m not married yet. It’s dangerous to make a statement. You can expect anything from a snide remark to being hit with a stick.” 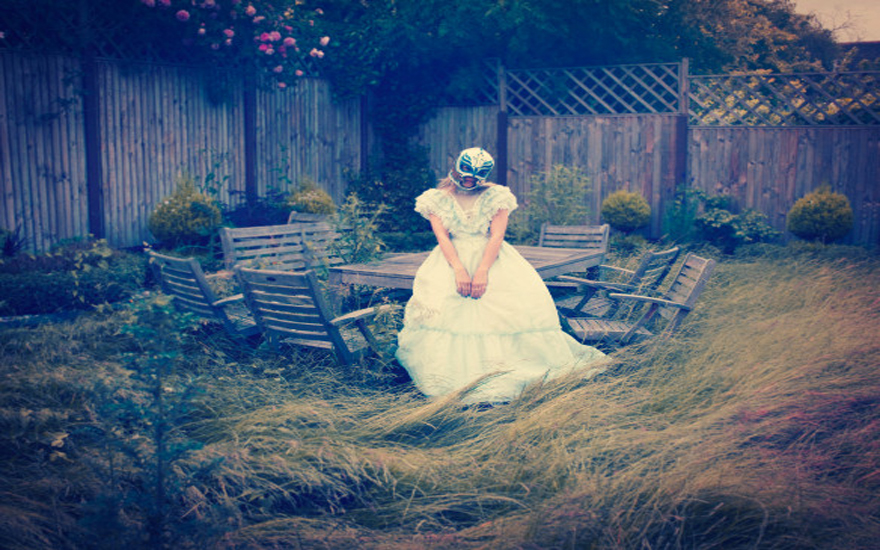 In fact, she boldly uses her own person as a model to poke fun at a social taboo — ‘old maid,’ the accursed woman who has dared to deviate from the ‘righteous’ path ordained mostly by those who are trapped beyond redemption themselves! Her ironic self-portrait as a ‘Fighter Bride’ with a wrestler’s mask, waiting wistfully in a back garden with overgrown grass blades, hits home with a bang. “A lot of women around me still see marriage as the end of a road. They see the husband as a kind of sponsor or a mentor, a money machine to milk. And are not interested in working after marriage.” Her battle cry is this, then: We matter, our dreams matter, and the size of our dreams matters. Her own dreams have made her something of an outcast in her native Russia. Twenty-eight years old, Bakhtiozina was born to a Russian Muslim father and a mother who was a Ukrainian-Russian Jew. At 21, she moved to London to pursue studies in graphic design and photography, after having studied politics back home. She then decided to return home to Russia, to address issues that bothered her. “There is very little tolerance for individuality in Russia, even today. The gatekeepers are still used to the Soviet idea of sameness, and everyone looking and behaving the same.”

The portraits are modelled on a series of 19th century works by the pre-Raphaelite brotherhood, the bad boys and girls of the Victorian age, anathema to its stiff-lipped prudence. In the original works, the models pose in exaggerated poses, swooning and enraptured. In an ironic recasting that nails her simple but bold message, Bakhtiozina casts her contemporary troupe in the poses occupied by prissy Victorian women. She amps up the drama, so that the final pictures feel like a walk through a dream zone, with the characters in trance, un-beholden and free. 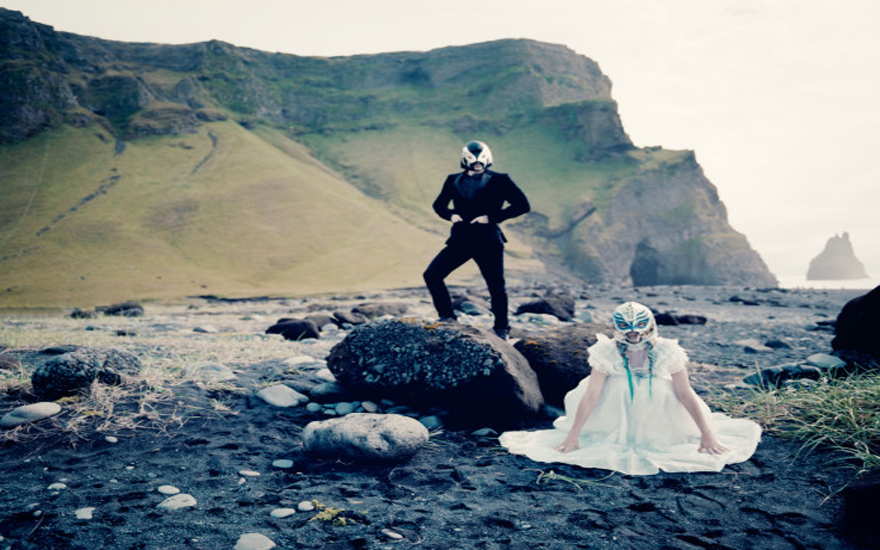 ‘We fight for a good husband’

The pictures punch you in the gut.

With unwavering childlike courage, they harp upon obvious but overlooked questions. Questions that would make any assembly of grown-ups squirm: On whose terms are you living your life? How free are you? What are your dreams? How big are they? Is there a Romantic hiding inside you? We’re half way through the new year, and now is as good a time as any to turn inwards and ask ourselves the questions that matter most, before we are too far gone for our own good.

Photos by the artist