In and Around the 8th Karachi Literature Festival

The 8th Karachi Literature Festival drew unprecedented crowds. In fact, the event seems to have outgrown the Beach Luxury venue where it has always been held. This year there were about 25 book launches and more than 170 panelists speaking in 70 sessions. The 40 guest speakers from 10 countries added to the vibrancy of the discussions. The food court which served up a mouthwatering variety of snacks and other foods never ran out supplies despite the thousands lining up for orders. Credit goes to the organisational skills of the hosts for keep the festival running smoothly. 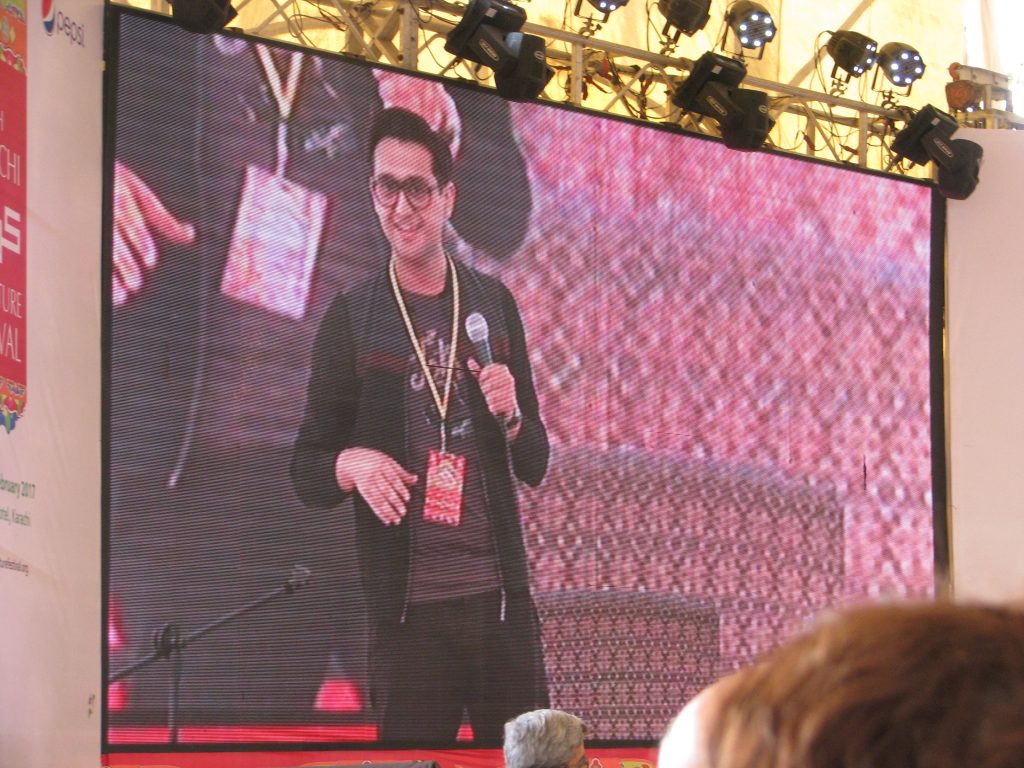 Stand-up comedian, Shafaat Ali may have drawn one of the largest crowds during his Stand up..and Laugh! session. He had the audience in stitches, taking them on a ride on an imaginary airplane that had all kinds of VVIPs, news anchors and celebrities. 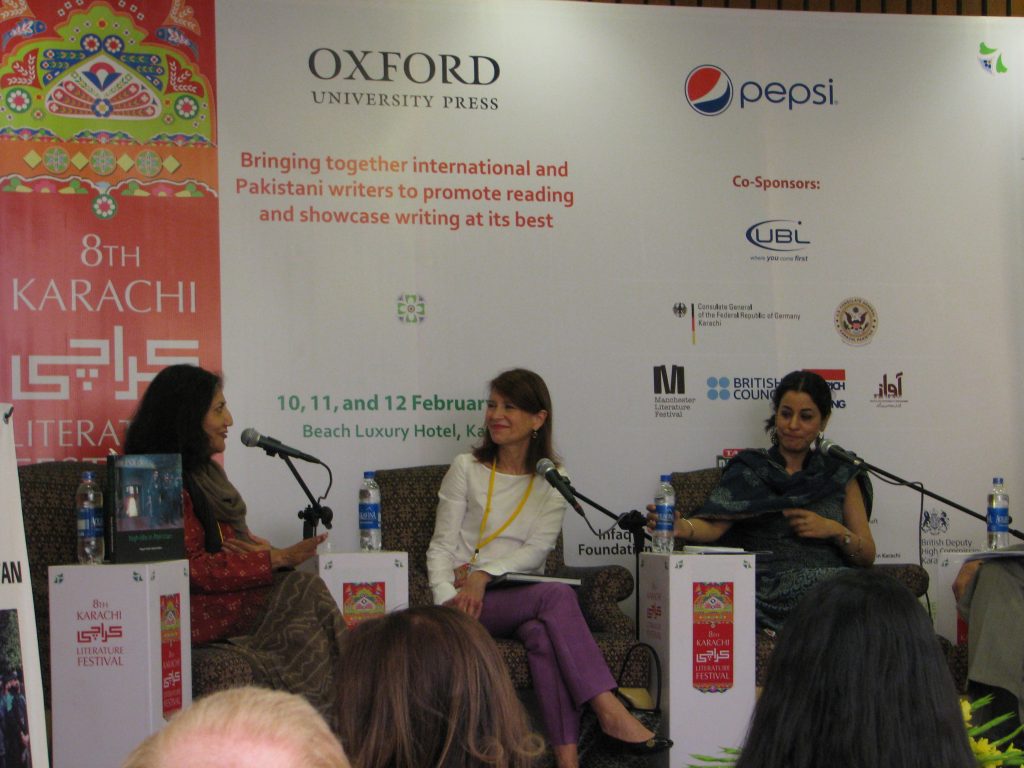 The book launch of High Life in Pakistan by Regula Bubb was among the first sessions held on day one of Karachi Literature Festival (KLF). In her conversation with Maniza Naqvi and Malahat Awan, Regula Bubb said that her book was based on the writings  culled from her blog about her experiences in Pakistan. As the wife of a former Swiss Ambassador to Pakistan, the author share her experience of the high life as a diplomat’s wife . But it also touches on other aspects of Pakistani life and culture that she had the opportunity to experience. She quoted a diplomat who said that ‘Pakistan had a way of getting into one’s DNA.’  She felt no matter which strata Pakistanis hailed from, their hospitality and warmth were traits they all had in common. 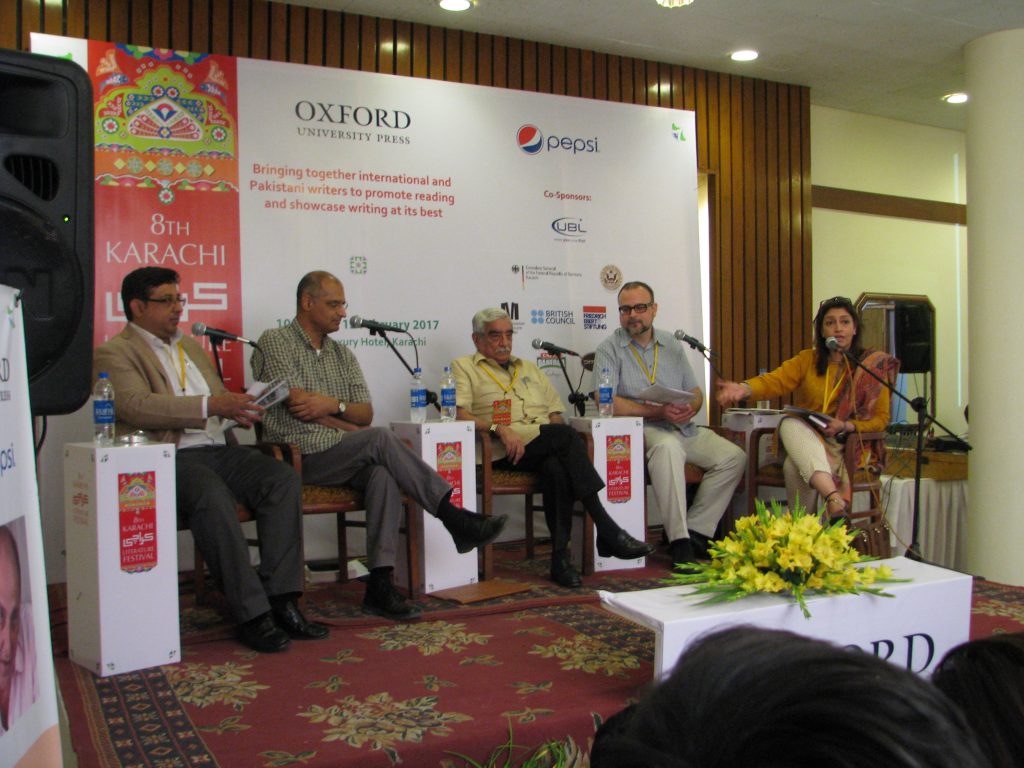 The session Huma Baqai moderated on International and Regional Politics impacting South Asia with panelists (right to left) Matthew A. Cook, Najmuddin Shaikh, Zia Mia and Asad Sayeed was very lively with the panelists humoursly agreeing, as well as disagreeing on various aspects impacting the country and the region. 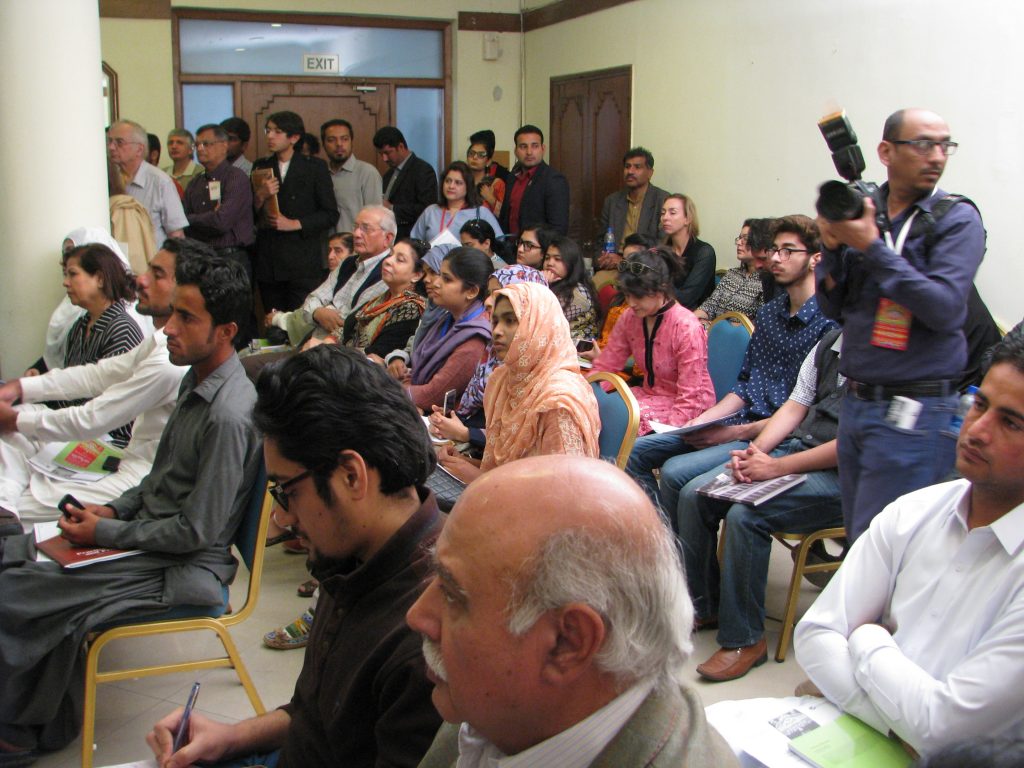 Invariably the KLF sessions were packed to capacity. There was barely any room to stand, let alone sit. Audiences were hard pressed to squeeze through the doors of the smaller venues. 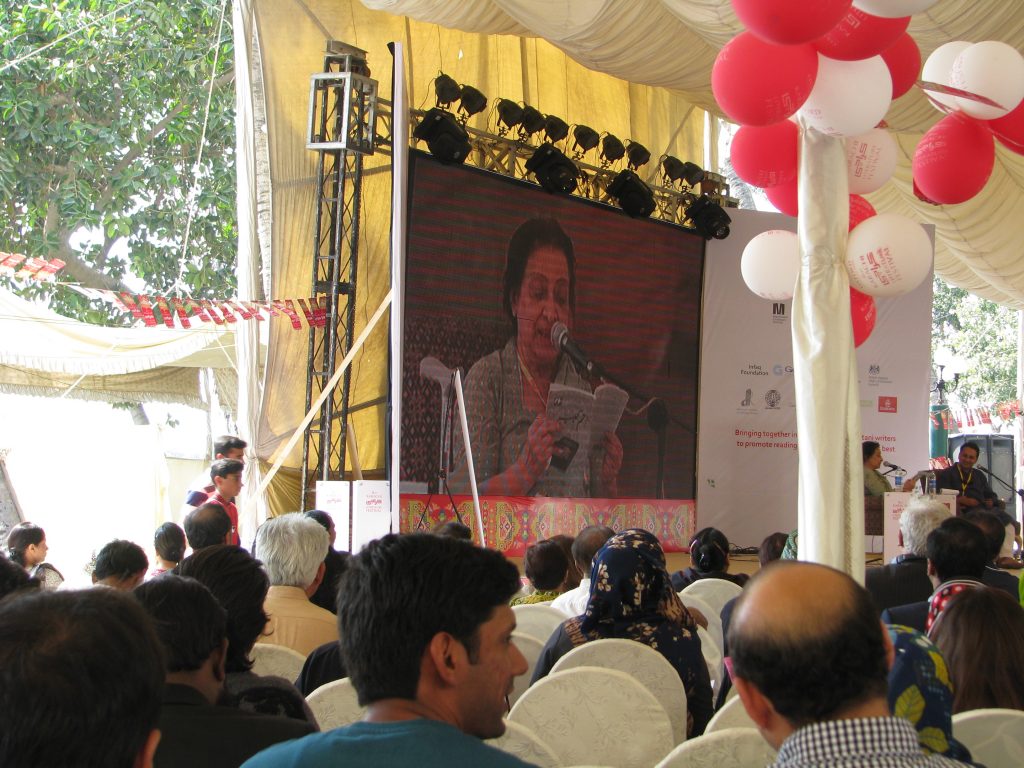 Fahmida Riaz reading excerpts from her books, Tum Kabeer and Qila e Faramoshi launched on Day 2 of the 8th KLF. 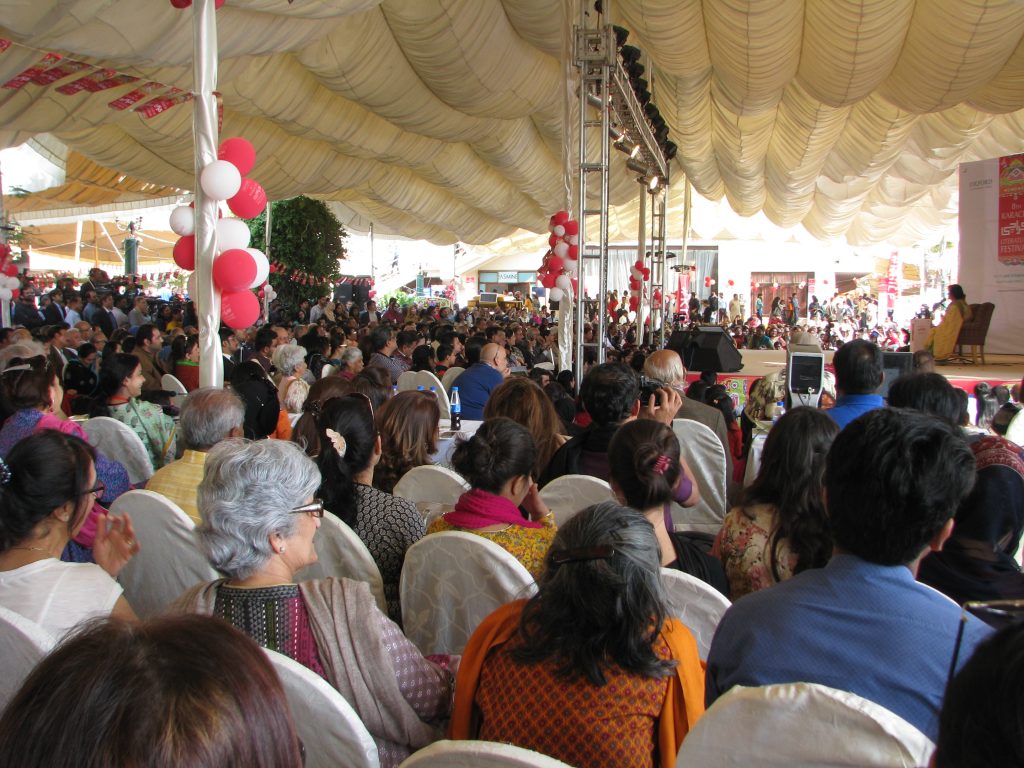 For the love of Shabnam. The Bengali heartthrob of Pakistani cinema’s yesteryears drew a massive audience. And the crowd waited patiently for her arrival, which was 40 minutes late since she was stuck in the traffic. In the meantime Bushra Ansari kept the crowds entertained with her humour and a montage of Shabnam’s well known films. Her conversation with Bushra Ansari brought smiles to the audience’s faces. 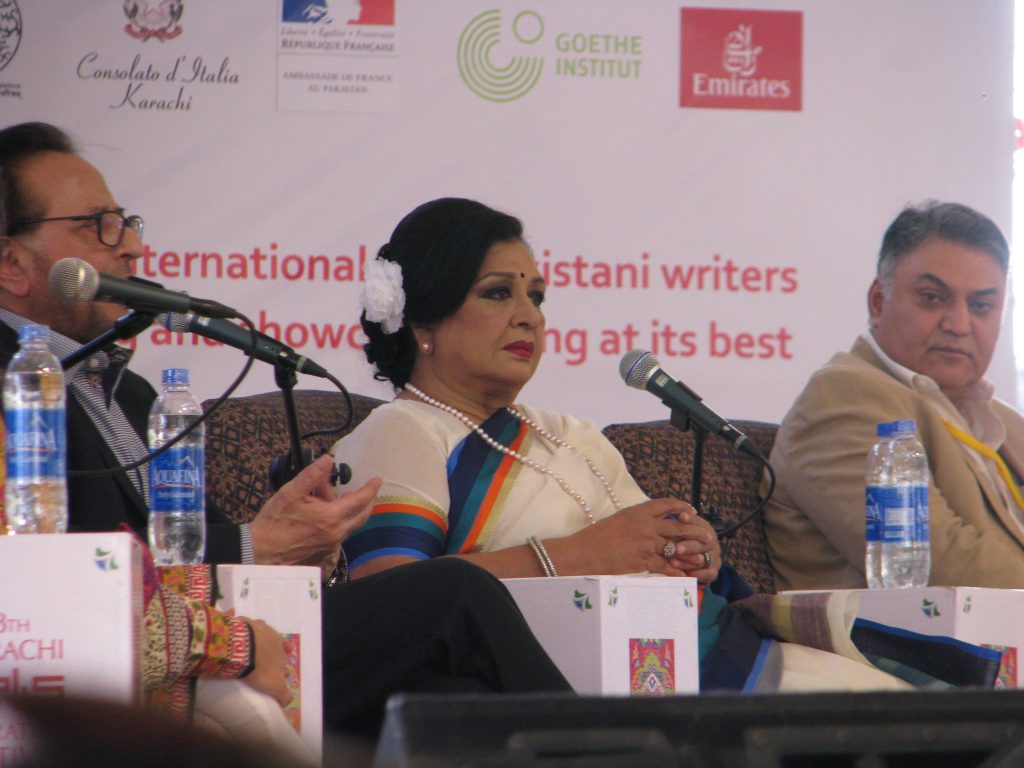 In the session  Cinema across the Borders, Shabnam along with her fellow panelists, Nadeem Baig, Asif Raza Mir and Mustafa Qureshi shared their views. 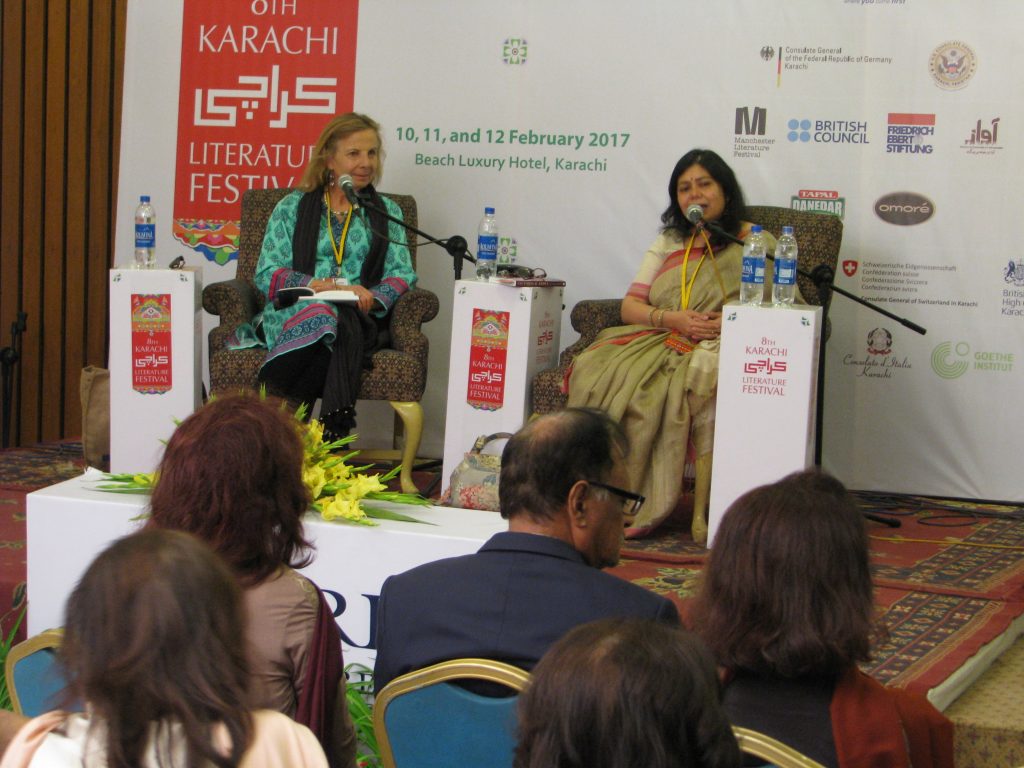 Shrabani Basu, the UK-based Indian authour of the book, The Empress and her Munshi spoke of her four-year journey researching documents and a trail that took her to Agra and Karachi in search of Munshi’s grave and his descendants. As the spellbinding session was about to close, an elderly lady from the audience identified herself as the great, granddaughter of the Munshi and thanked Basu for writing the book. 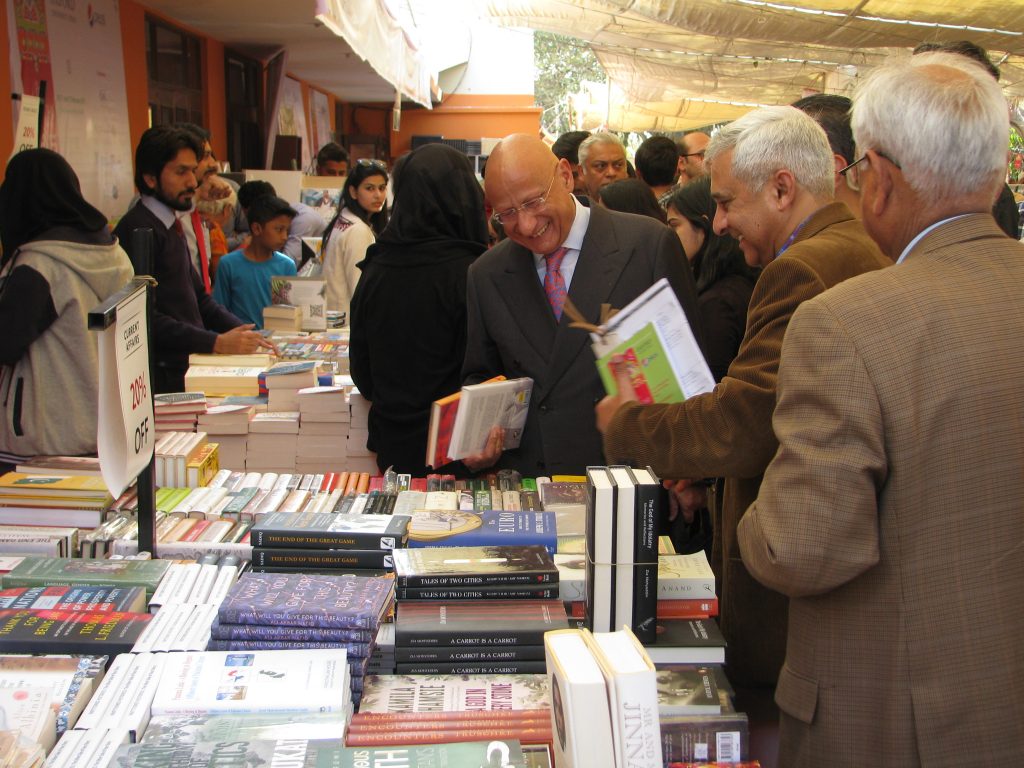 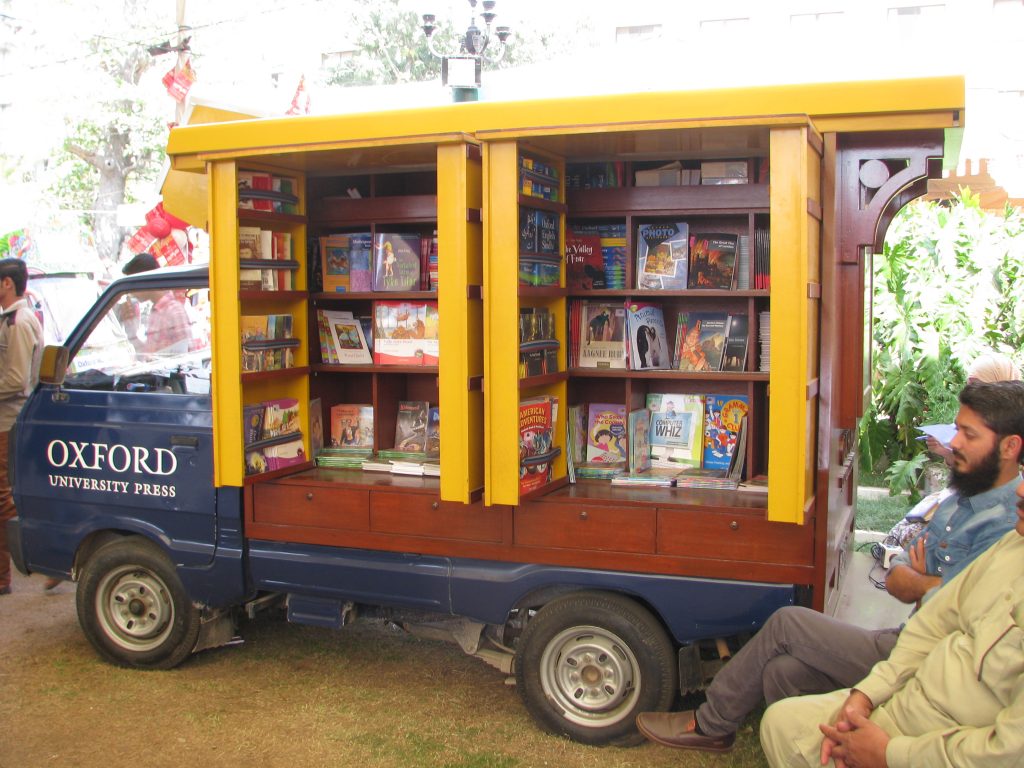 One of Oxford University Press’s mobile book displays in the main garden area. 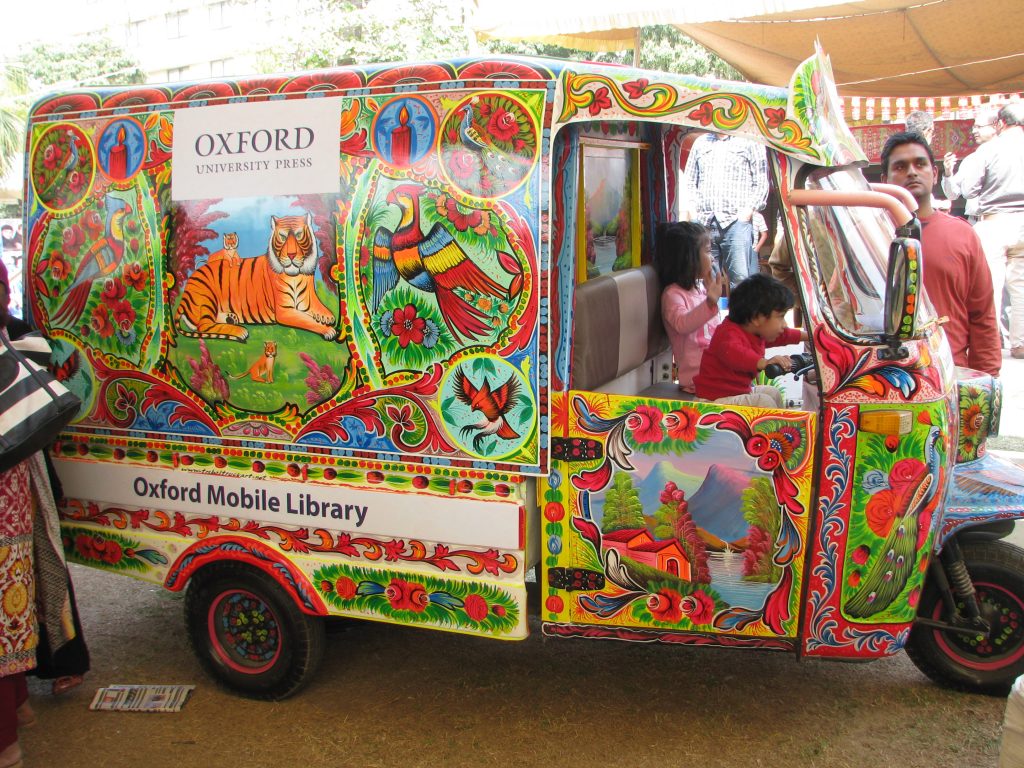 Kiddies checking out the Oxford Mobile Library – a revamped rickshaw colourfuly decorated to the hilt with traditional truck art. 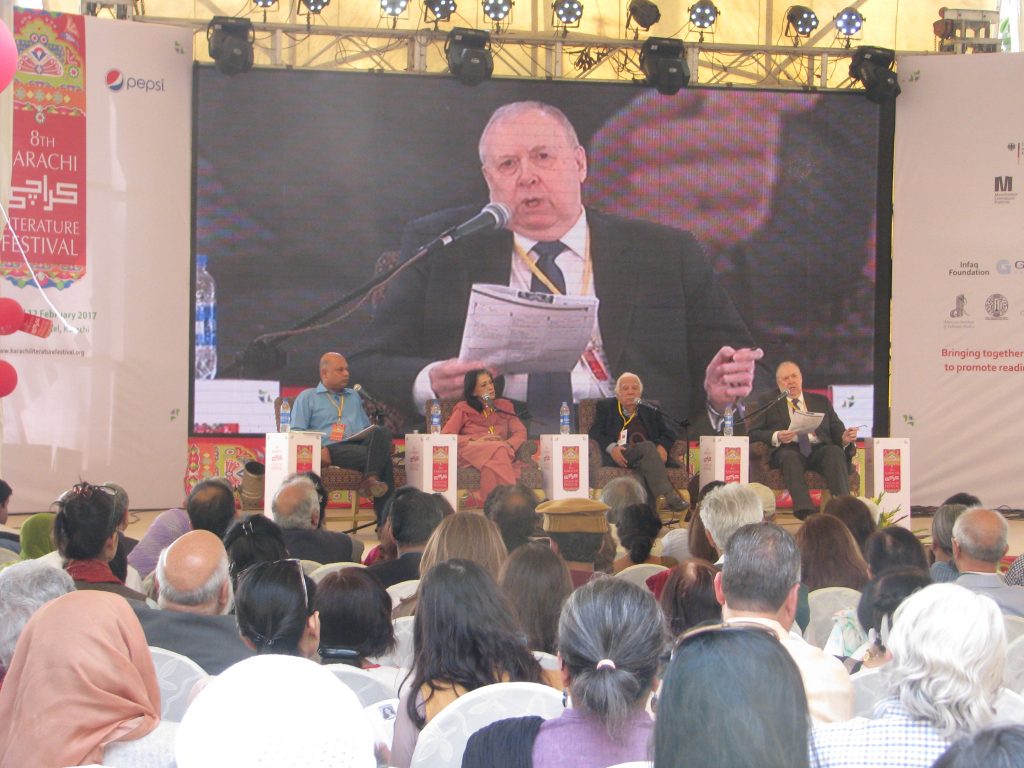 Roger D. Long, US-based scholar and author of The Founding of Pakistan: An Annotated Bibliography speaking during the session on The Birth of Two Nations and joined by fellow panelists (from the left) Sayeed Hasan Khan and Ayesha Jalal and moderated by Harris Khalique.