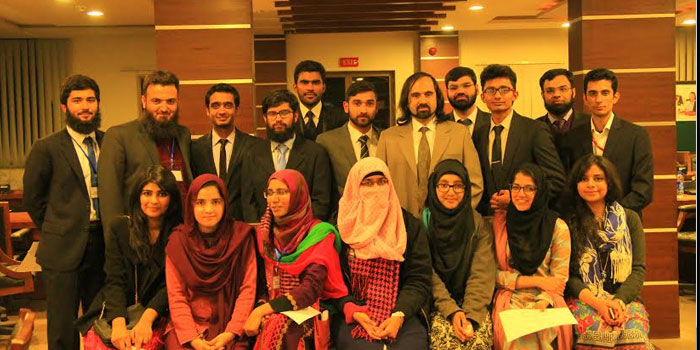 Pakistani society is being rent asunder by a chasm that seems to be growing wider each day. It is a divide between the global village liberal and the ultra-orthodox religious. Pakistan faces the conundrum of having to decide which side of the divide to embrace as its identity.

This widening gulf is most visible among the country’s student population. This is perhaps because universities in Pakistan offer a diversity of experience that is largely absent in the safe environs of school and home. Here youth meet other youth of varying description. The factors that contribute to this variation are gender, the class students belong to, the kind of education they have received, the geographical area they come from, their ethnicity, religion, and behaviour. The level of interaction that university life offers, with a wide spectrum of choices left open to students, can yield polar opposites in terms of mindset and lifestyle, from the conservative and rigidly, sometimes fanatically devout, to West-influenced, free-wheeling liberals.

Universities such as IBA, LUMS, NUST, Szabist and others, with an assortment of undergraduate and postgraduate programmes that invite students from all over the country to undertake university level education, provide a reliable barometer to gauge how two worlds co-exist in close confines.

Karachi, Pakistan’s largest melting pot, hosts the greatest diversity of creed, financial wherewithal, ideology, etc. Students from different universities in Karachi contend that for the most part diversity is not merely accepted, but even welcomed in Karachi. That, however, remains a moot point.

Szabist’s environment is fairly open-minded and accepting, with discussions on different viewpoints a common happening between students of different religions and groups. Students in hijab freely mingle with others in jeans and t-shirts. Devout Muslims are seen happily befriending students from minority groups, including Hindus. But, given the increasing Islamism in the country, and the sporadic attacks on minority groups, there is a lingering fear among the latter and they are never entirely secure.

The IBA is another ethnically and ideologically diverse university, with minority groups making up 40 per cent of the student body. This has yielded a relatively liberal, secular environment. Usually judgement is reserved on individual beliefs, social circles are mixed, and progressive conversations about acceptance and equality resonate in the halls. But here too there is an element of uncertainty among the minority students. Some choose to hide their religious beliefs simply because they fear they might become targets of prejudice — or worse.

Other universities in Karachi, meanwhile, seem to have become decidedly less secular, with an exponential growth of the ‘beard and burqa’ culture on campus

Perhaps in a bid to counter this and salvage the secular nature of their institutions, some universities are choosing to promote the enrolment of more ‘liberal’ students. Habib University is often cited as an example of one such institution.

The ethos in Punjab’s universities meanwhile, is more definitive.

At the Lahore School of Economics (LSE), for example, students from minority groups such as Bohris, Christians and Ahmedis say they face discrimination, hostile stares and generally unwelcome behaviour on a daily basis. An LSE student spoke about how in the Punjab, the criteria for social acceptance is foremost, one’s sectarian denomination — ie being Sunni, followed by ethnicity — ie being Punjabi, and closely thereafter, being wealthy.

Meanwhile. a student from LUMS revealed how there is  always underlying tension at that university. The student body at LUMs is divided between two different ‘extremes:’ unabashedly secular and devoutly religious. The increase in the latter has led to some concern within the administration, because  faith is increasingly used as a lever to intimidate students with different ideological leanings.

The difference between the universities of the Punjab and Karachi is particularly interesting, because it demonstrates a growing reality: the schism between the two provinces. The universities are, after all, microcosms of the societies they exist in.

And that sadly is the story of Pakistan today — a split country with no fixed identity.