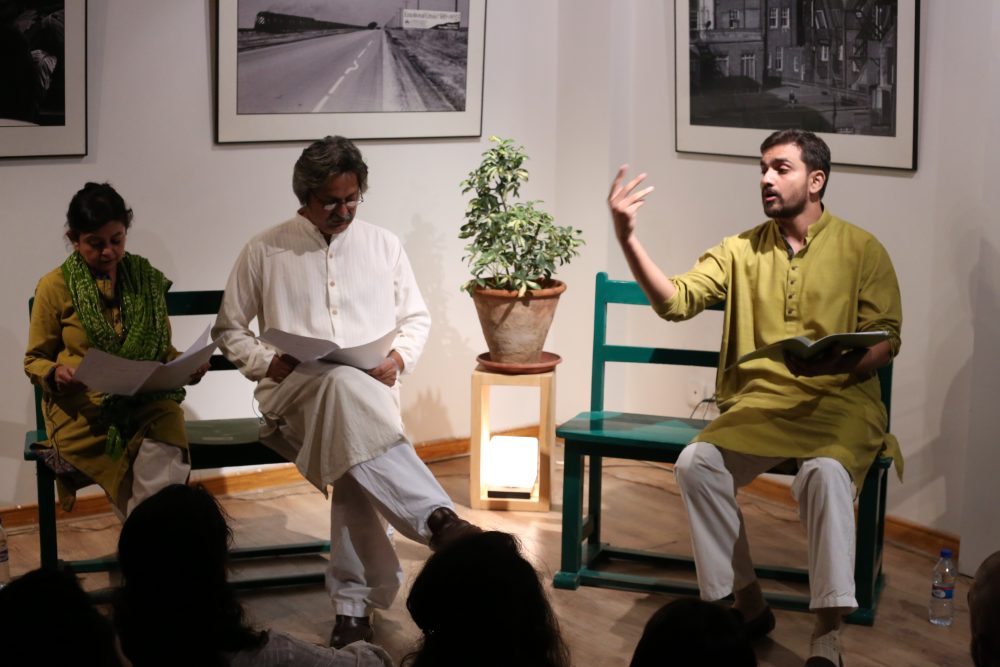 The romance and nostalgia associated with the railroads was recently brought to life at T2F by Zambeel. Railway journeys are often invoked in literature, lending themselves as they do to dramatic situations. The journey itself becomes a metaphor, strangers are thrown into close proximity, and emotionally charged partings and reunions are witnessed.

Zambeel chose five stories by different authors but all linked by the railway theme.

The first story Katta Hua Dabba, by Intizar Hussain, centered on a group of friends gathered together, recounting stories of their travels. While the more verbose amongst the group waxes on about his experiences, another member of the group is reliving his memories involving a comely young woman who he had seen at a railway station. But whenever he considers sharing the intensity of his emotions, he is interrupted and his inner turmoil eventually remains unexpressed. Saife Hasan and Fawad Khan brought this circle of friends to life, immersing the audience in the story.

The second story Dhoka, by Mubashar Ali Zaidi, was a brief vignette recounted by a young man who is a habitual visitor to the railway station where he engages with random strangers who capture his fancy. The story was read by Fawad Khan who imbued the narrator with a mischievous but also wistful, almost philosophical, spirit.

The third story , Reserve Seat, also by Intizar Hussain was about an old lady, Bari Boo, who is visited by a succession of deceased relatives in her dreams. She searches for meaning in these encounters, but the interpretation of one dream in a railway carriage eludes her. The meaning is finally revealed but only in the wake of a devastating personal tragedy. Bari Boo, was brought to life so convincingly by Mahvash Faruqi that one quite forgot that she is not actually an ageing hypochondriac. She was ably supported by Fawad Khan as the narrator.

Perhaps the most entertaining piece of the evening was Aik Shauhar Ki Khatir, penned by the inimitable Ismat Chughtai. Written in the first person and read by Asma Mundrawalla as the protagonist and with Mahvash Faruqi filling in for different passengers, it is the story of an umarried young woman journeying alone from Jodhpur to Bomaby. En route she is accosted by a series of well-meaning but nosy ladies who are appalled at her single status. In order to parry their increasingly intrusive questions, the harried young girl concocts a series of lies which become more and more absurd as she is forced to embellish the truth. 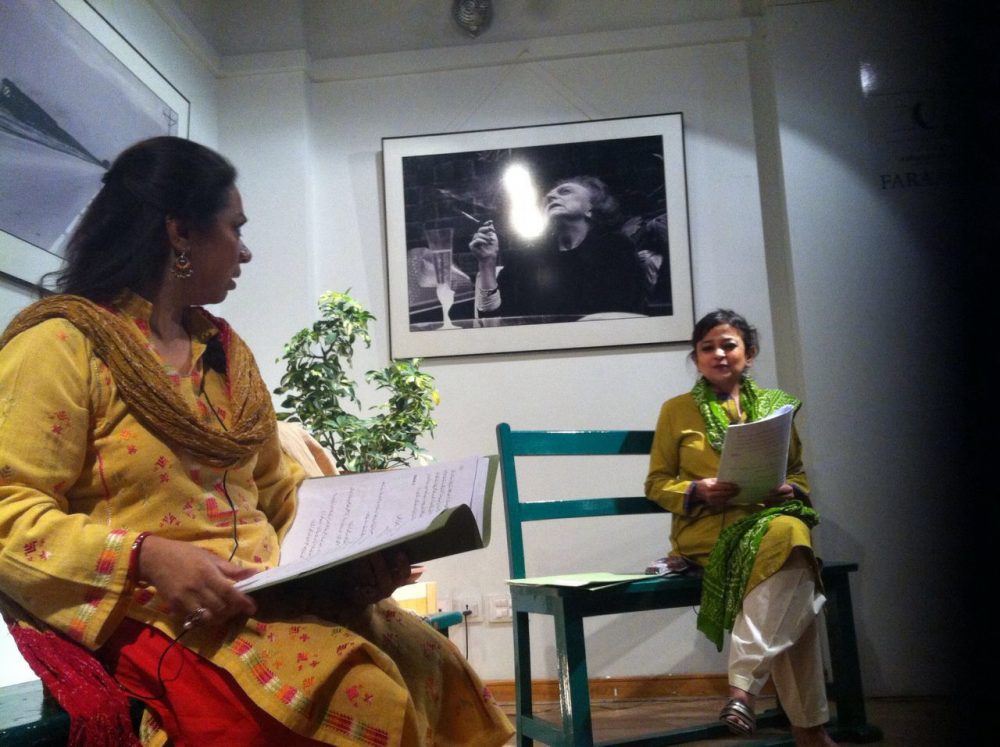 Ismat Chughtai’s irreverent wit and the Zambeel duo’s expressive narration had the audience laughing out loud. But as is the author’s hallmark, the humour is used to comment on societal strictures and narrow perceptions.

The last story of the evening was read by Saife Hasan and Mahash Faruqi. The tale is set in the Thal desert with the first coming of the railway in that region. The new mode of transport is seen as a fearsome and disruptive thing in the desert wilderness. Written by Ahmed Nadeem Qasmi, the story dwells on the power of myth and superstition. The protagonist fears that the railway is cursed by the local saint and even as life changes around him, he clings to the old ways.

Zambeel’s success lies in the fact that they keep honing their skills, managing to keep successive performances fresh and engaging. Asma Mundrawalla is to be credited with the increasingly sophisticated sound effects which enrich the story-telling experience and allow audiences to effectively recreate worlds in their imagination. The gurgling of the hukka, the chatter at the railway station successfully invoke characters and situations without the use of props or sets. In fact, one doesn’t miss these elements at all. The music lent by Danish Faruqi also added to the mood, the plaintive plucking of Sindhi instruments invoking the vastness of the Thal.

The team is also to be credited for their wonderful selection of prose, culling the choicest pieces from the rich body of Urdu literature. We owe them a debt of gratitude for bringing these stories to life and introducing them to new audiences.