On ‘Education Day’ held on January 8, members of civil society, NGOs, parliamentarians and social activists in Karachi came together to march from the Karachi Press Club to the Sindh Assembly demanding ‘Taleem Sudhario, Sindh Sanvario (Save Education, Save Sindh),’ – which is also the name of their forum. The members came together to address the deteriorating state of education in the province and to observe 2017 as the year of education in Sindh. Members of this forum had organised similar activities in Hyderabad and Larkana and plan to hold various programmes, seminars, workshops and meetings throughout the year. One very pertinent demand of the  demonstrators, on a priority basis, was the appointment of school headmasters based on merit  and not feudal influence in the rural areas. 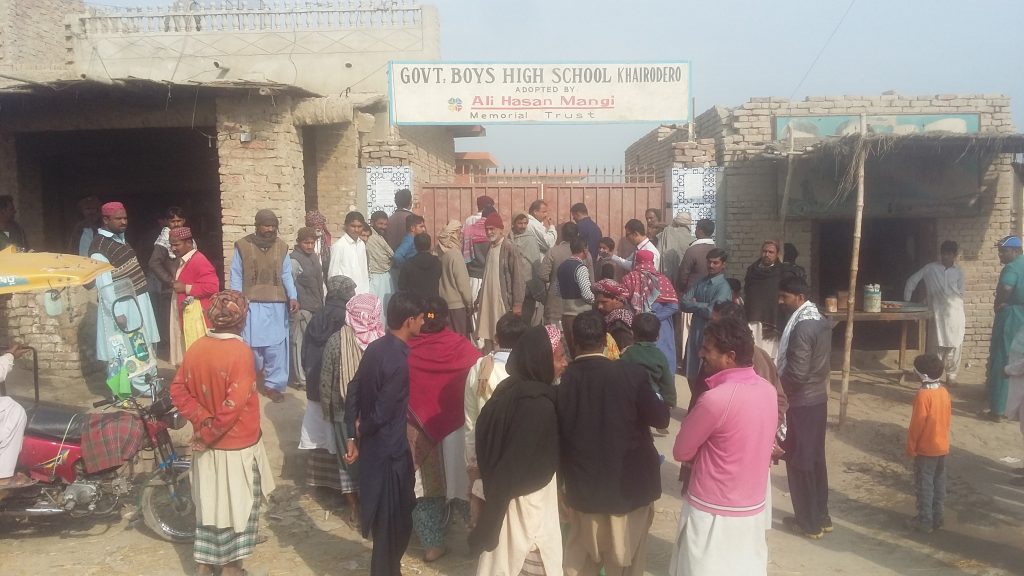 The staff employed by the Trust was thrown out and school gates locked by the headmaster.

A  recent case, highlighting this very trend involves the headmaster of the local Government Boys High School, Abdul Qadir Bhutto. Under his watch, there was practically zero student attendance at the school while Bhutto himself continued to draw a handsome salary of Rs 100,000. Then, in 2014, the school was adopted by a grassroots, non-profit organisation, the Ali Hasan Mangi Memorial Trust.  To improve the quality of the school, five people were hired by the Trust to teach as well as monitor progress. The team implemented an aggressive outreach programme that increased the number of students to 75. The Trust also developed the school’s playground, provided whiteboards and equipped the school’s science and computer labs and the library.

Ali Hasan Mangi Memorial Trust (AHMMT) is a community organisation that was established in 2008 in Khairo Dero, a small farming village in Taluka Rato Dero, Larkana with a population of 4,000. It is the ancestral village of the founder, Naween Mangi, a financial and economic journalist and media trainer with a career spanning two decades, writing for local and international news organisations in Pakistan and the US.

The Trust has adopted five schools in the village and has faced problems in varying degrees in working with those on the government’s payroll. According to Mangi, ever since adopting the Government Boys High School in Khairo Dero, the headmaster has created hurdles despite their best efforts to convince him to run the school more effectively and actively enroll students. On the contrary, he discouraged his teaching staff from attending to their classes while in school — even those who wanted to. The support staff too had to be constantly reminded by the Trust employees to clean the classes and the toilets or attend to their other duties. 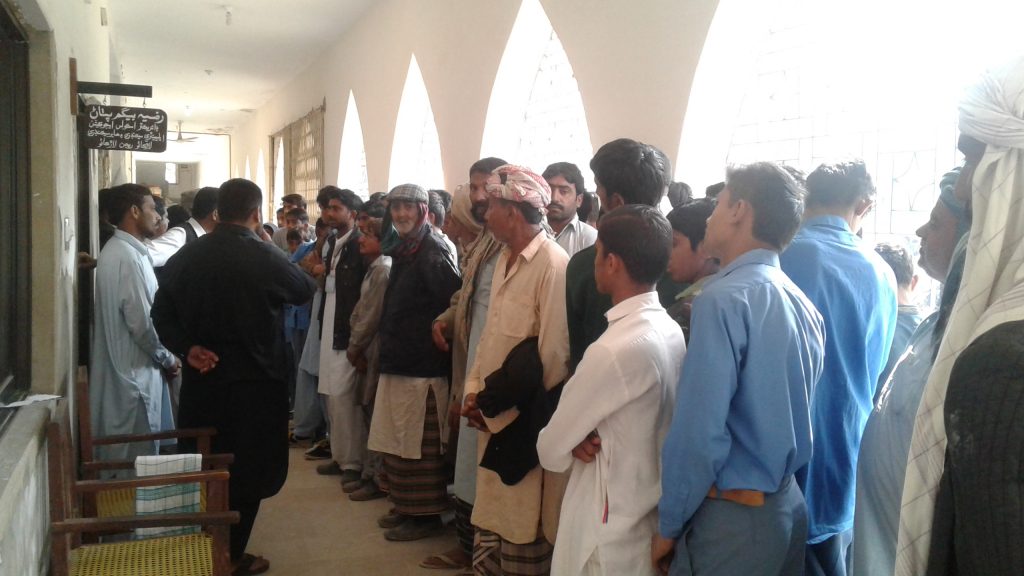 Khairo Dero residents wait in peaceful protest outside the office of the Director Education in Larkana.

But the headmaster did not stop here. He also helped himself to the school’s doors, windows, bulbs, the school’s solar power system worth Rs. 46,000 purchased from the School Management Committee (SMC) funds and moved them all to his residence. A series of complaints to the district education office, the education secretary’s office, and the education minister’s office by the Trust last September did not yield any results.

When the headmaster learnt of the complaint filed with the education department he brought back part of the solar power system and had it locked up first inside a toilet then in a classroom.

On Jan 21 2017, Mangi found the school library vandalised and books thrown on the floor in the dust. She immediately had her staff remove the school equipment belonging to the Trust for safekeeping. Matters came to a head on January 23, when the headmaster went to the extreme of physically throwing out the Trust’s teaching and supervisory staff from the school premises and had the gates locked. Meanwhile, the students — all older boys who were alarmed at seeing their teachers being manhandled — were locked inside their classrooms.

Members of the general public including fathers of the students locked inside the classes arrived at the school, demanding answers from the headmaster. After releasing the children, they insisted he leave their village which he refused. At this, along with 50 students, the protestors boarded a bus and headed to lodge their grievances with the Education, Director Razia Pathan in Larkana. She met a few members of the group, but according Mangi, she felt it was pointless meeting the protestors or suspending the headmaster as he had already been asked to report with immediate effect to the Education & Literacy Department by the Education Secretary on December 6 — which he hadn’t. But despite Pathan’s  assurances that the headmaster would no longer be allowed at the school, he showed up there the very next day. 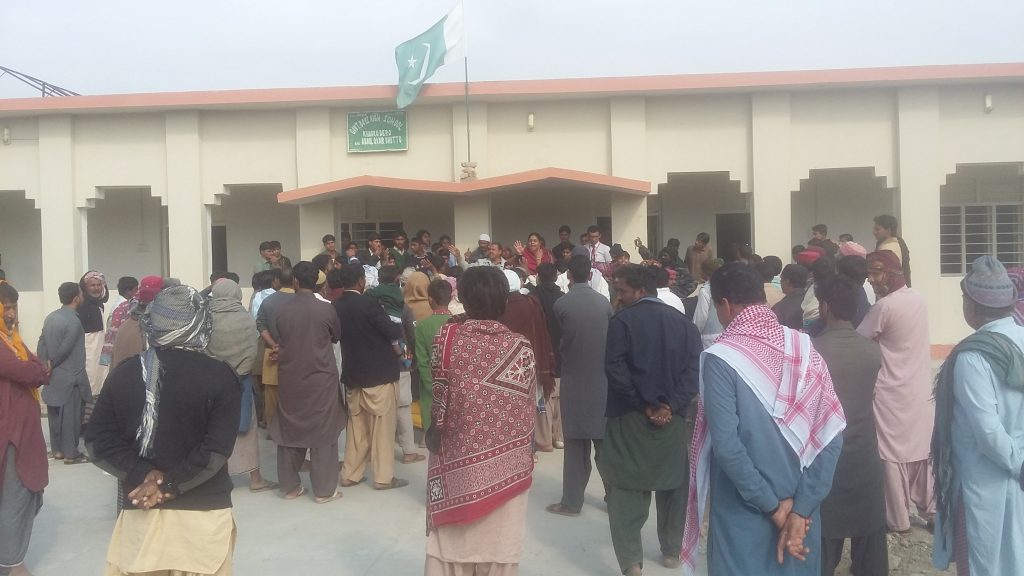 Public gathers at the school to protest against the headmaster.

On January 23, Mangi wrote to the Sindh Chief Minister, Murad Ali Shah, detailing the headmaster’s gross misconduct. Mangi also stated that parts of the school solar power system were still missing as well as other school fixtures and fittings that the headmaster had illicitly removed from the school. And he is believed to have pocketed an amount of Rs. 44,000 from SMC funds for which he has no receipts. She requested the CM’s intervention in the matter and asked that the headmaster, Abdul Qadir Bhutto, not only be removed from the school in question but that he should not be transferred to any other school where he may cause similar disorder. While there was no response from that end, the headmaster is no longer coming to the school which remains operational. What remains to be seen is whether the errant headmaster returns or is transferred to another school, which Mangi hopes to prevent. The headmaster is believed to have the powerful backing of a local PPP MNA.

The adopted government schools have to be run through public-private partnership as the Trust does not have the resources to fully fund the five schools it has adopted in the village. Mangi and her dedicated staff have faced various degrees of resistance, as well as success, from their four other adopted schools. Success  depends heavily  on the level of commitment by the government employed staff.

However, change is also visible in the way the villagers and their children raised their voices and lodged a complaint with the higher authorities rather than accepting what was being meted out. Clearly, the Ali Hasan Mangi Memorial Trust has successfully instilled a sense of ownership and enthusiasm within this community.