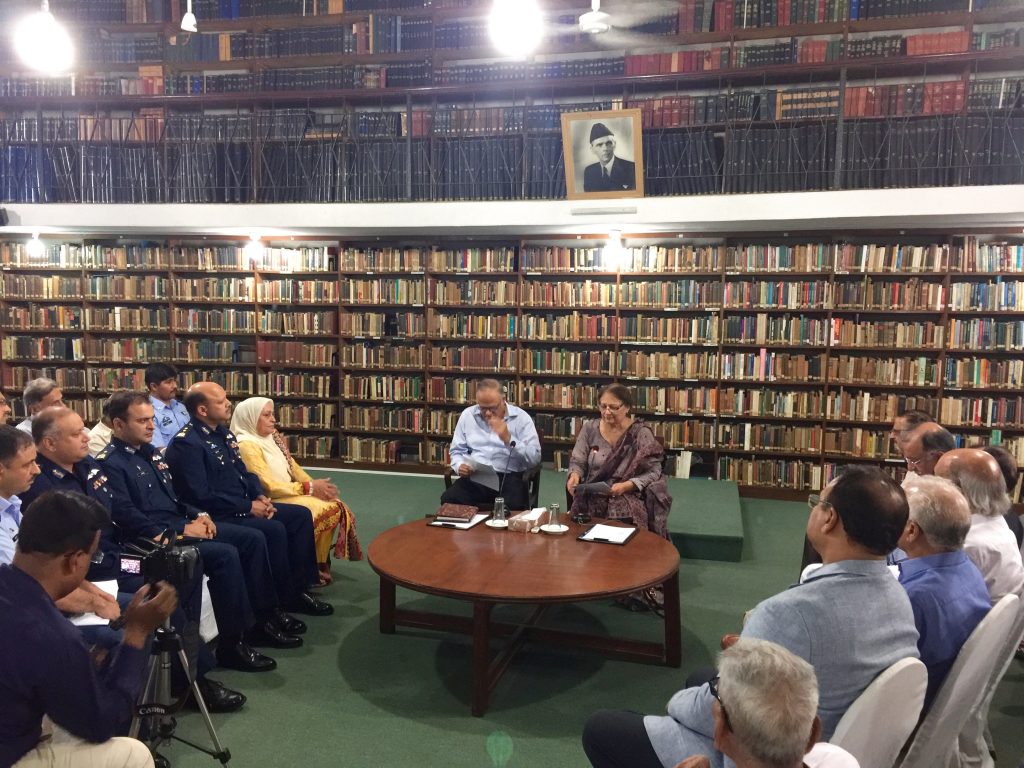 KARACHI: Senator (R) Javed Jabbar, a member of the Senate Forum for Policy Research, led a round table discussion titled ‘The Dynamics of Iran, Qatar, Saudi Arabia and US Relations,’ at the library of the Pakistan Institute of International Affairs (PIIA), on July 13, 2017. Mediated by the Chairperson of the PIIA and former cabinet secretary, Dr Masuma Hassan, the discussion was attended by academics, journalists and members of civil society, including historian and Pakistan Studies professor Dr Muhammed Reza Kazimi, President of the Oxford and Cambridge Society Tariq Jafar, and a delegation of the Pakistan Air Force led by Air Vice Marshal Abrar Ahmed.

During the round table discussion, Jabbar pointed out that the Qatar crisis demonstrated a new reality that was emerging in international relations: that regional pacts could no longer serve as harbingers of regional stability. He cited Brexit and SAARC as examples, arguing that SAARC (established in 1986) had failed as a conflict resolution mechanism. The root cause of this failure was the fact that it was marked by asymmetry. “Can a regional pact be stable,” asked Jabbar, “if it contains asymmetry?”

The Qatar crisis began, “like a bolt from the blue,” recalled Jabbar, when on June 5, 2017, four Arab nations — Saudi Arabia, the UAE, Bahrain and Egypt — decided to cut ties with Qatar on the grounds that it was supporting terrorist groups and maintaining diplomatic ties with Iran. Apart from Egypt, all of the above mentioned countries, including Qatar, are members of the Gulf Cooperation Council (GCC). Jabbar said that Iran’s decision to expand its ties with Qatar in such a scenario demonstrated a maturity that was admirable.

According to Jabbar, the crisis was not a regional one, but a global issue that involved the Great Powers, such as the US and Russia, since one-fifth of the world’s oil came from the gulf. He argued that there was no such thing as an insulated region. Referring to the illusion of unipolarity in the global arena, Jabbar said that the Qatar crisis illustrated how power had become diffused and had redefined itself. The US, he argued, may be the dominant global power in conventional military terms, but after the longest military campaign in their history — in Afghanistan — it was clear that they had gotten nowhere. Jabbar cited that $800 billion had been wasted in the war in Afghanistan.

The framework of this new phase of human history, he argued, would be shaped by “composite power” — military power, economic power, political power and, most importantly, the participation of the people. Factors such as technology, geo-politics and communication had begun to determine how states related to each other. The media — whether it was social media, print media or electronic media ­— was an inherent factor of inter-state relations. Although the media always portrayed itself as a messenger of sorts, this was a myth, argued Jabbar. “We are approaching a point in history where scholars will redefine the framework of international relations,” he predicted.

According to Jabbar, the 13 sweeping demands that Saudi Arabia had made of Qatar sounded frightfully similar to a power point presentation conjured up by global management consulting firm McKinsey & Company — a favourite of King Salman bin Abdulaziz. Jabbar explained that one could not ignore the fact that only six years ago, Saudi Arabia and Qatar jointly invested in an Israeli company called IDA Holdings. Saudi Arabia’s insecurity, he argued, was evident in the fact that it devoted 10 per cent of its GDP to military spending — an amount high even by US and Russian standards. Jabbar also pointed out that the Qatar conundrum would enable the arms bazaar to thrive. 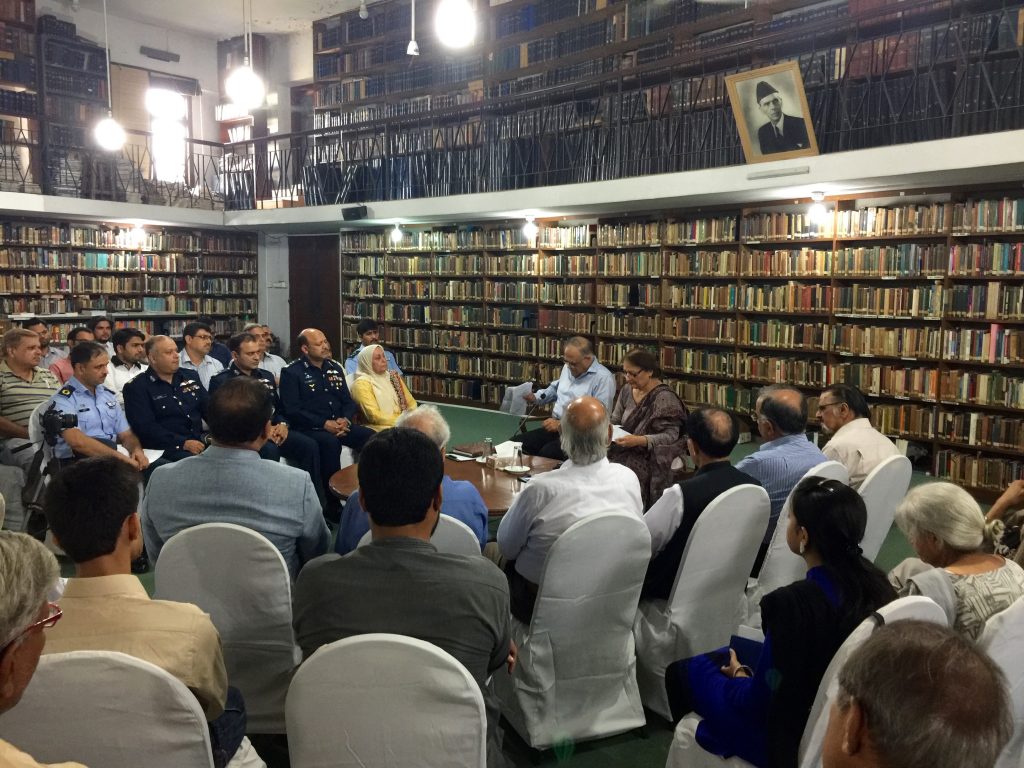 The library of the PIIA.

On a more positive note, he said that efforts attempting to resolve the crisis were visible. Saudi Arabia would back down, but only in phases, and shades of these were already evident. After the US Secretary of State, Rex Tillerson met with the foreign ministers of Saudi Arabia, the UAE, Bahrain and Egypt, there appeared to be a de-escalation in rhetoric. The US could not afford to give up its Al-Udeid air base in Qatar, from where it carried out excursions to Syria and Iraq. Therefore, it had a vested interest in Qatar and would ensure that no harm was brought upon the country. The theoretical threat to its frontiers was neutralised by the presence of US bases. According to Jabbar, the economy of Qatar was fairly stable, partly because it had such a small population but also because it had a huge sovereign fund. The Saudi-led blockade of Qatar, he said, was tantamount to psychological warfare and theatrics. However, he pointed out, there was internal discontent in Qatar, over the disparity of wealth.

Referring to The Allure of Battle, by historian Cathal Nolan (OUP, 2017), Jabbar explained that the book analysed how civilian and military leaderships often mistook victory in battle to be the actual outcome of conflicts. Outcomes of conflicts, he said, cannot be foreseen, as they had wide-ranging effects.

In response to a question from the audience on the “real” reasons why Saudi Arabia was attempting to isolate Qatar, Jabbar stated that while one instinctively tended to sympathise with Qatar, the country was no angel. Qatar had been punching above its weight for a long time. Qatari broadcaster Al Jazeera Arabic focused little on domestic problems, he revealed. It had been broadcasting content that condemned the Jews as a people — and not Israel or Zionism. It promoted extreme anti-Jewish statements and glorified messages coming from extremist elements, explained Jabbar.

Responding to a question on whether the discovery of shale oil in the US would change the scenario of global oil dependency, Jabbar said that the US was already fairly self-reliant and did not critically depend on oil supplies from the Gulf. The US deliberately did not reveal its quantity of shale oil reserves. As such, shale oil will not have a direct strategic impact, although it may effect oil prices.

Refering to the library of the PIIA — where the event was held — Jabbar reminisced about the days when he visited the centre as a University of Karachi student in 1963. He praised the PIIA as Pakistan’s first think tank of international affairs and a trend-setting institution. It was, he said, “an island of treasure, in a sea of commerce.”

The writer is an Assistant Editor at Newsline. He is on Twitter @aliHbhutto