Art Review: A Space of her Own

Four women shared some beautiful narratives through their artwork in a show at Sanat Gallery called Chaar Auratein, Chaar Kahaniyan (Four Women, Four Stories). Each artist contributed four paintings; hence the four segments of the exhibition title. A collaboration between Sanat Initiative and Studio RM, the show was curated by Irfan Gul Dahri.

When the mental formation of ideas converts into language, it acquires an expressive form and may then be shared with others. Using the visual language of colour and line, Farazeh Syed, Saba Khan, Sadaf Naeem and Sana Arjumand have traversed the spectrum that moves from thought to its manifest expressions on paper and canvas. They have communicated their truths on what womanhood means to them.

A holistic consideration of the four works revealed much about the location where each artist places herself within the dialectics of internal and external discourse. The inner state is reconstructed visually in order to comprehensibly communicate with others. Framing the four narratives as discourse between the interior and exterior self, permits the viewer to isolate the thematic elements within each artist’s personal discourse.

Farazeh Syed’s quadriptych (acrylic on canvas) titled, ‘The absurdity of it all,’ portrays the monumental form of a full-bodied woman. She stands against a wall with her back towards us. The many folds of her skirt soften her silhouette. The canvas is rendered in pale green hues. There is no background detail to divert attention away from this singular individual. A faint line indicates the changing planes between the floor and the wall. This powerful quadriptych was hung as two pairs on separate walls of the gallery, which broke the strong narrative that is developed through the four units.

From the first panel to the fourth, the woman makes transitions in posture indicating that her innate urge to self-liberate is active. Farazeh Syed’s narrative proves her contention regarding the body as a “signifier of lived experience…as opposed to a metaphorical object of perfection or passivity.”

Metaphor — on the other hand — is central to the narrative in Sana Arjumand’s work. She uses imagery from nature as a trope for life-giving vitality — a quality associated with the essence of traditional femininity. Her highly stylised depictions of crested birds represent the nurturing relationship of mother and child. She includes the Maryam booti [Anastatica hierochuntica] flower in every painting as an additional trope that symbolises motherhood, as this desert flower can revive and rejuvenate from its desiccated form when it is submerged in water. 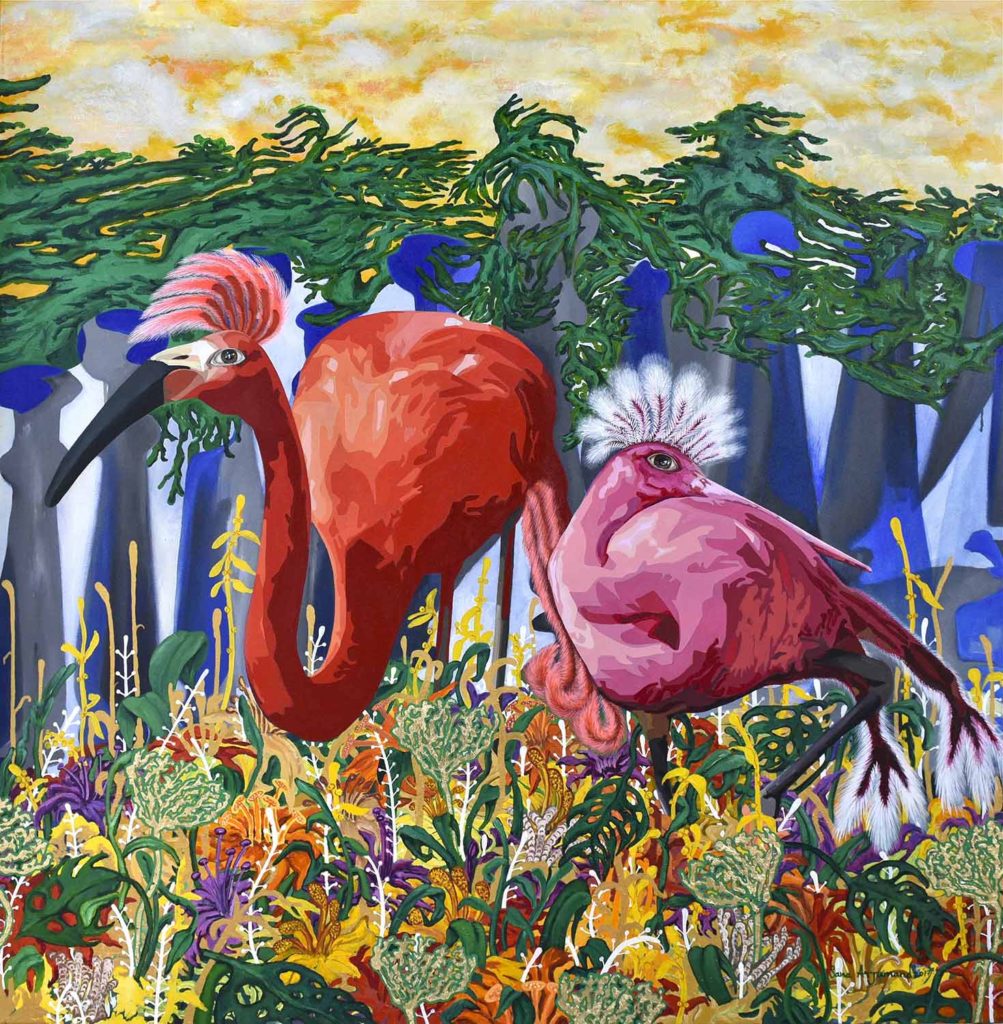 Sana Arjumand’s birds and flowers are set in an idealised landscape. Her touches of gold leaf and embroidery accentuate the richness of the surface and underscore the fabulous and metaphorical aspects of the imagery. She interprets the quality of nurturance as a kind of sacred home, “a place of growth, of rising, of crossing created boundaries and limits.”

The idea of home continues to play a central role in the narratives of Sadaf Naeem and Saba Khan, even as they emphasise very different aspects of the relationship an individual bears with the home.

Sadaf Naeem paints her garden, which plays an important role as a retreat and sanctuary from the bustle of the world, “like a whisper in a noisy environment.” The garden space reflects the inner monologue that plays on the artist’s mind. The surface of the canvas becomes a symbolic arena to convey the idea of mental activity. There is all-over patterning, hints of trees, shrubs and flowers. There are grey spaces with silhouettes of two women. These important grey spaces represent the subjective content, and the two women are actually the artist herself engaged in an interior dialogue.

Saba Khan’s schematic representations of house and home are carefully embellished with beads, glitter and crystals. Her narrative on the home is a comment on the status a decorated home imparts to the owner. Candy pink colours, plump sofas and a heavily frosted cake attest to the culture of plenty that the nouveau riche aspire to. Her vignettes of interiors show “Lofty homes with European and Punjabi sensibilities, peer[ing] out from the high walls that separate classes and divide social structures.”

The four presentations in Chaar Auratein, Chaar Kahaniyan — varied as they are stylistically — demonstrate a self-sufficient and mature exposition of differing layers of interiority — an interiority which may be interpreted as that intuitive self-awareness which negotiates between the inner world of the personal self and its locus within society.